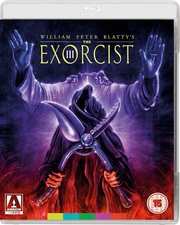 DVD
The Exorcist III (US)

Blu-ray
To Live and Die in L.A.

DVD
Exorcist, The: The Version You`ve Never Seen (US)

DVD
Exorcist, The: 25th Anniversary (US)

Blu-ray
A Fugitive From the Past
Related Articles

Review for The Exorcist III

Set fifteen years after the events of the original Exorcist (thankfully ignoring everything that happened in Exorcist II) Exorcist III follows Lieutenant Kinderman, who had witnessed the death of Father Karras (who performed the exorcist) and was now investigating a series of grisly murders. These murders have the same marks of a killer called The Gemini Killer, but he was caught and executed fifteen years before.

Kinderman investigates the links between the original exorcist case and these murders and leads him to a ward with a mysterious Patient X, who claims to be the Gemini. However, if he is locked in a ward, how is he committing the murders? This leads to a shocking revelations that Kinderman must stop him before anyone else is killed.

The Exorcist III is either a masterpiece or a mess. There seems to be no other way to describe it. The problem of course is that you spend most of teh film comparing it with the original. Now, I will openly say that this film is acres better than Exorcist II, which is barely watchable, but in comparison to William Friedkin's original, it is a mess.

Written and Directed by William Peter Blatty who wrote the original novel, won an Oscar for the Screenplay and went on to write the book Legion this is based on (I'll come to that in a second) seems to almost know what he's doing, but just falls at the last hurdle. There are moments that are genuinely scary and jumpscares that are not cheap and well built, but the whole film feels plodding and unnecessary. Performances by George C. Scott as Kinderman and Brad Dourif as The Gemini are fabulous and maybe if the film had just been these scenes it could have worked. Scott was nominated for a Razzie for Worst Actor for this film, but this was not a Razzie-worthy performance and very typical for him. Listening to Dourif's speeches with the multiple voices and segues is the creepiest part of the film.

It is just a shame that the studio meddled with the film so much that it just feels like a film that was stolen from its creator in order to meet a demographic. I found myself very listeless watching this film and sadly a little bored at moments. It wasn't scary or interesting enough to warrant a second viewing and this is a shame.

There are two versions of the film The Exorcist III that was released and an assembled Director's cut which is closer to the Legion book the film is based on. I am not sure which one I prefer, both are enjoyable in their own way. The only issue with the Legion cut is that many of the scenes (due to their nature) were not the best quality, but at least you can see what pieces are added rather than trying to guess.

Of the two, I am not sure which version I preferred. A lot of people have said that the Legion cut is scarier and flows better and I have to admit the removal of the exorcist scene shows just how unneccessary it was. The rest of the film is more of the same. We also do not get the return of Jason Miller as Father Karras which I actually thought made the other version more interesting, but I can understand people just wanting to watch the amazing performance by Dourif.

However, I found that the Legion version was more interesting to watch with the Commentary provided by critics Mark Kermode and Kim Newman. The two really hit home why this cut is so important in regards to bringing a Director's vision to fruition. It is a shame and also odd that there are no special features devoted to how they created this cut as it seems like this story would be something that needed to be told.

Commentary by critics Alexandra Heller Nicholas and Josh Nelson is fine and it is clear they enjoy the film, but are not just fans and give a great insight into the film and its making.

Death Be Not Proud: The Making of The Exorcist III is a bizarre collection of five featurettes combined to tell the story of how the film was made. Chapter One 'A Wonderful Life' looks at the initial creation of the film. Chapter Two 'Signs of the Gemini' is an interview with actor Brad Dourif. Chapter Three 'The Devil in the Details' looks at the Production Design work with Leslie Dilley. Chapter Four 'Music for a Padded Cell' is a look at the making of the score with composer Barry De Vorzon. Chapter Five 'All This Bleeding' looks at the additional shoot and special effects. Thankfully there is a 'Play All' option and this works well. The only feature I could imagine watching again separately was the interview with Brad Dourif who is always awesome.

The audio interview with William Peter Blatty is shown as a commentary, but it really isn't one. It is just simply an interview with Blatty that has been tacked onto the film. This doesn't really work and though a lot of what he says is interesting to hear with stories about The Exorcist and The Exorcist III and his career, but it just does not sync up.

Falling Down a Long Flight of Stairs is an interview with Special Effects Artist Randy Moore. This is only less than ten minutes long, but he does go into most of the important parts of the film and how they were made. It is great to see how they created the 'falling down stairs' shot which is so very effective.

Vintage interviews from the time feature Writer/Director William Peter Blatty, Producer James Robinson and Actors George C. Scott, Jason Miller, Grand L. Bush and Ed Flanders amongst others. There is nearly forty minutes of interviews which are all great to see how they went about making the film and what their thoughts were.

A vintage Making of is a typical quick look at the making of the film with interviews with everyone involved with the making. This is a nice way to build up interest in the film.

Deleted scenes, alternate takes and bloopers is a five minute mixbag of scnes and probably should have been divided into the three separate types. Worth watching for the 'Carp' scene which is just great.

Image Galleries and Trailers wraps everything up and these are nice if you are a huge fan of the film, especially the Japanese Press Book which would have been better translated, but still interesting to see.

The Exorcist III is a good film and has moments of genius, the problem is the perfect exorcist film exists and that was made in 1973. If you are a fan of the film or book and you want to see how it was supposed to be then you will love the Legion cut and the wealth of extra features makes it worthwhile. It may not be as good as the original, but it is a worthy sequel and definitely better than Exorcist II.