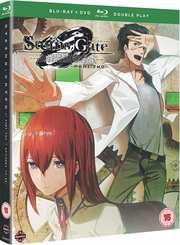 The Future Science Laboratory consisted of ‘mad scientist’ Okabe ‘Okarin’ Rintaro a.k.a. Hououin Kyouma, eternal geek Itaru ‘Daru’ Hashida, and ball of eternal cuteness Mayuri Shiina. Their aim, to create inventions that will change the world. Rigging a microwave to turn bananas into green gel might not change the world, but hooking up a mobile phone somehow turned the contraption into a time machine. That didn’t become clear until after Okabe attended a time travel seminar, and witnessed the murder of a young red-haired scientist named Makise ‘Christina’ Kurisu. He phoned home to tell someone about it, and somehow wound up in another timeline, where Makise wasn’t murdered, and even joined the Future Science Laboratory. History had changed, they’d entered another time track, and much experimentation ensued. 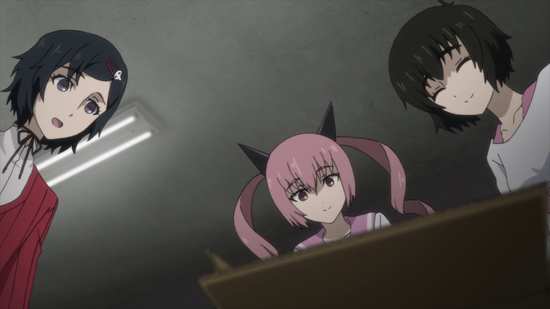 It’s all fun and games at first, until someone gets hurt, and to Okabe’s agony, he found that Mayuri was destined to die, and no matter how much he travelled back in time to save her, he kept failing. By this time, Daru’s daughter from a post-apocalyptic future, Suzuha, had travelled back in time herself to change her own future, and it became clear that saving Mayuri meant undoing all the changes they had made. Also by this time, Okabe was falling in love with Makise, and had come to the horrific realisation that saving Mayuri meant going back to that first timeline where Makise was murdered. But Suzuha told Okabe that the only way to prevent the post-apocalyptic future was to shift to a completely different timeline, the Steins;Gate timeline where both Mayuri and Makise survive. She managed to convince Okabe to travel back in time once more to save Makise, but he failed in the most traumatic way possible. They returned to the present, with him a broken man. 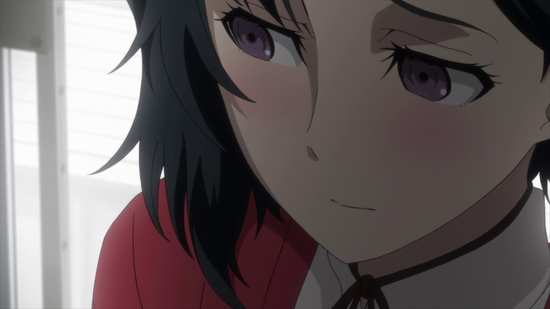 In the original episode 23, a slap convinced him to try once more, but in Steins;Gate 0, Mayuri protects him from Suzuha’s ire, and convinces him to stop tormenting himself. We catch up with Okabe 6 months later, and he’s trying to turn his life around. He’s put the Future Science Laboratory behind him, has cleaned himself up, and gone back to college; he’s even dating again. After six months, he tries going back to the lab for old time’s sake, meeting up with friends like Ruka and Faris, but Suzuha hasn’t yet given up on convincing him. But he gets a blunter reminder of the past when he attends a lecture on AI from Alexis Leskinen, a guest professor from the US, although his diminutive interpreter, Maho Hiyajo makes more of an impact. They used to work with Makise Kurisu, and have used her theories of copying and inscribing memories to circuitry to make AIs with vivid personalities a reality. The first one Okabe encounters is a copy of Maho, but when he’s invited to take part in the project, providing fresh input for an AI, he learns that a copy of Makise Kurisu exists, alive, in software. 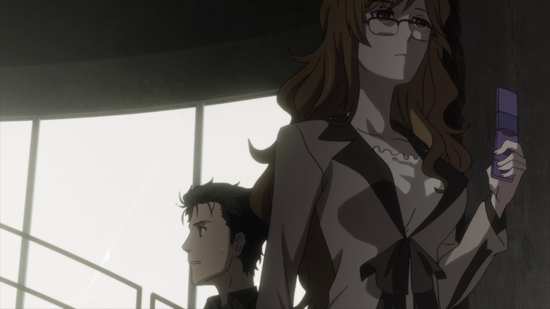 12 episodes of Steins;Gate 0 are presented across 2 Blu-rays from Manga Entertainment in this Part 2 release. 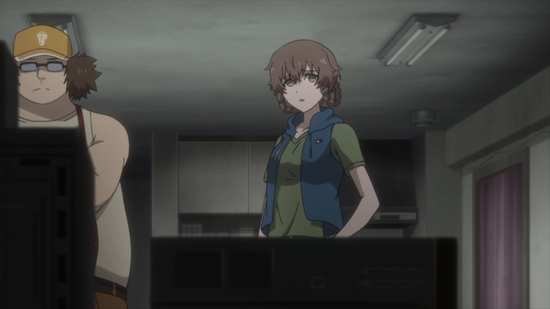 Digital banding as a creative choice? If you recall the first series of Steins;Gate, when I reviewed it on Blu-ray. I made quite some noise about how the show’s transfer was almost detrimental to the viewing experience, so prevalent was the digital banding. And now comes Steins;Gate 0, and I was expecting more of the same. I wasn’t disappointed, at first. The first episode I watched was Steins;Gate 23β, the alternate 23rd episode of the original series, complete with that show’s theme songs, which leads directly into this one, and just like that first season, it was raddled with digital banding. But when I started watching the Steins;Gate 0 episodes, the banding was reduced. 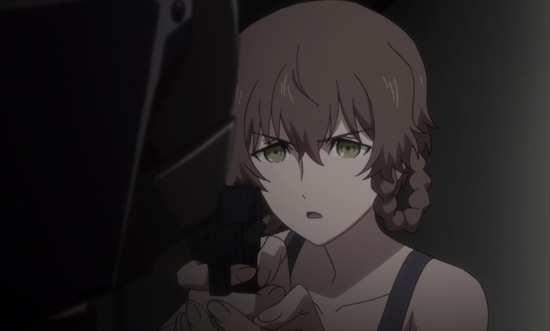 Steins;Gate 0 gets a 1.78:1 widescreen 1080p transfer on these discs, and the image is clear and sharp, detail levels are good, and colours are consistent. In terms of world design and character design, it follows on directly from the first season, and is on a par with it. It’s just that when it comes to digital banding, it’s comparatively negligible, although not quite reduced down to what you’d expect from a Funimation transfer. This and the look of 23β really have me reconsidering the idea that the banding was a creative choice for that first season. 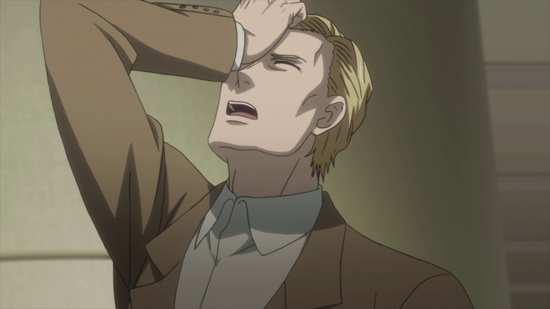 You have the choice between Dolby TrueHD 5.1 Surround English and 2.0 Japanese with player locked subtitles. Early on there are a couple of subtitle captions that linger a little too long, but it soon settles down. I went with the Japanese audio, and was happy with the experience. The familiar characters and voices are back, while the new characters in the story are also cast well. There might not be as many ‘Tutturus’ as before, but the tone of the story demands a little restraint in exuberance. One oddity is that the voice actress for Nae doesn’t suit the character anymore, although when you have a ten year or so gap between the series, keeping the same voice actor for a little girl is probably not advisable. The subtitles are timed accurately and free of typos, and the music suits the show well, as do the new theme songs. 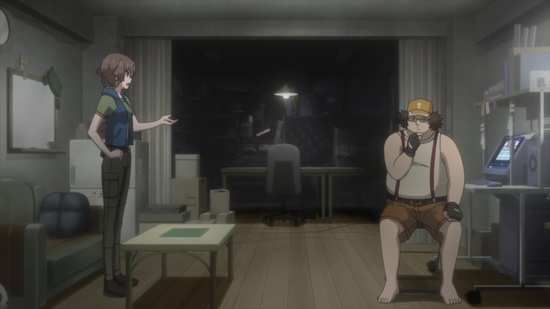 The discs boot to animated menus, and disc 1 autoplays a trailer for Funimation Now.

There is an audio commentary on episode 20 with Jad Saxton (Faris), Lindsay Seidel (Ruka), and Tyson Rinehart (Daru). 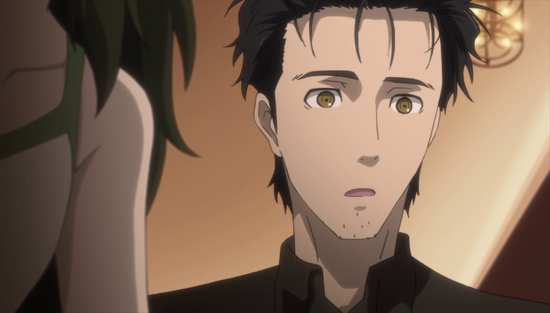 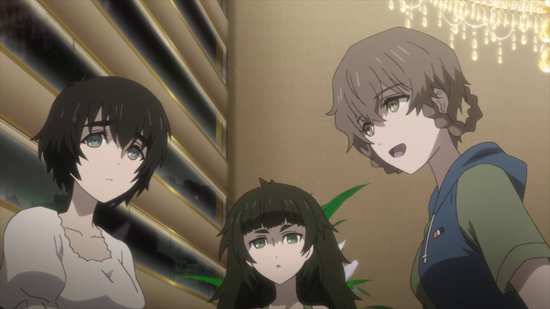 I may have oozed positivity when it came to Steins;Gate 0 Part 1, but I was also aware of fan reactions to the conclusion of the series, with some decrying a veritable shark-jumping conclusion. If I’m honest, I wasn’t expecting good things from the conclusion of this show. In the end, I’m glad to say that it’s not that bad, although at one point it does jump a minnow if not a shark, and if it does disappoint me, which it does, it’s because of a couple of growing realisations rather than any singular epiphany. Steins;Gate 0 is a well made, and very watchable show. It’s not its fault that it fails to stack up against the original. 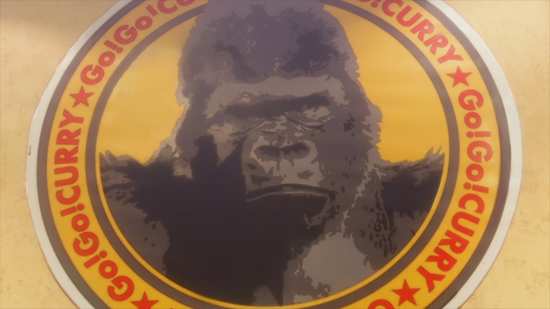 The problem, which wasn’t so much of a problem for me in part 1, is that the characters in Steins;Gate 0, particularly that of the protagonist Okabe Rintaro exist in a completely different mind space to that of the original series. This time Okabe has seen failure and is living with the consequences of loss, of having made an impossible choice, and his depression is constant through the series. If you loved the playfulness of the original, the grand theatrics of his Mad Scientist persona, then other than a few brief, pained glimmers, this show is bereft of that energy. I didn’t feel it as much in the first half, but as this second half unfolded, that depression began to grate on me as a viewer. I wanted some of the energy and vitality of the original series back. I wanted to the like the characters again. 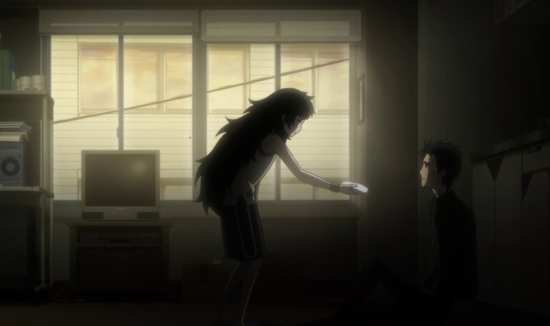 Steins;Gate 0’s premise is that back when Okabe Rintaro and Suzuha were about to step in the time machine for the second time to once again try and save Makise Kurisu, Okabe’s abject despair at failing the first time stopped him, and Mayuri protected him, supported him in his desire to surrender to fate. The time line fractured at that point, and continued on towards an inevitable World War III, fought over time travel technology. Okabe tried to forget it all, despite Suzuha’s attempts to change his mind, grateful that Mayuri at least would survive even if Kurisu did not. Things began to change when he met Professor Leskinen and his assistant Maho, learned of their work in AI, and met the Amadeus program, Makise Kurisu’s personality encoded onto a computer. 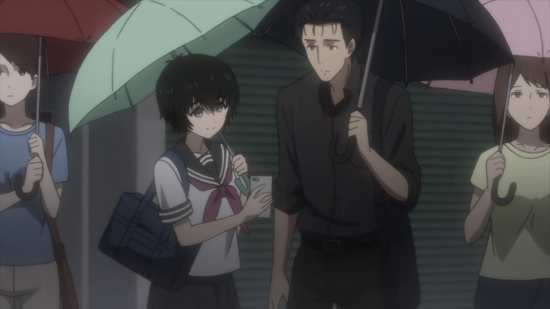 In this collection, the pressure of time begins to weigh. The time machine is low on fuel, has just enough for one more trip, and pretty soon, a date will be reached from whence it will be impossible to go back far enough to change history. With Okabe unwilling to go, Suzuha finds someone else to help her, and just before time runs out, they enter the time machine and activate it, and all hell breaks loose. That’s a focal point it seems, the trigger for the events that spiral into World War III, as three factions coalesce around the time machine. Disaster strikes, and Okabe is left in the wreckage, facing the reality that he’s already lost that which he thought he had saved. 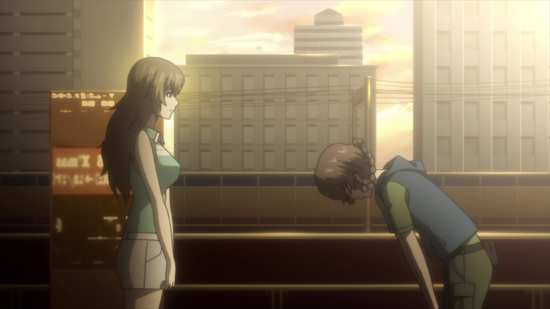 Broken out of his despair, he’s once again forced to travel back in time to change things, but with the time machine gone, he’s left with the inferior technology of the Time Leap device, which sends his consciousness back in time. Just as in Steins;Gate, it becomes a case of trying, and trying again, facing repeated tragedy until he figures out how to fix it. 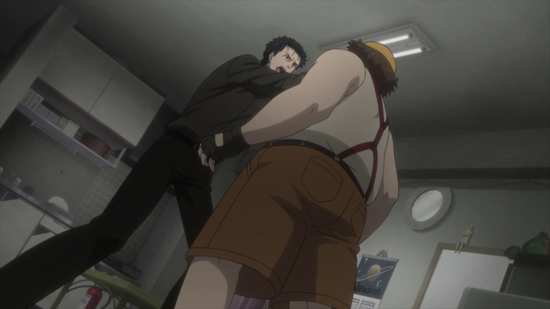 It’s here that I guess what many consider the shark jump takes place, as Okabe is confronted with the consequences of his actions, or failure to act. A seemingly insurmountable hurdle is placed in his way, the problem defined, the plan delineated, and for me this is where the minnow is jumped, as the solution happens off screen. What should have been the most satisfying, and well designed action sequence is in the end left to the imagination, and we catch up with the character after he has completed his Herculean task. It’s at this point that we see the Mad Scientist persona again, and given the trials that he has just faced, we assume that Okabe has hardened himself to do whatever it takes, however many times it takes to succeed. But just one failure later, depressed Okabe is back. 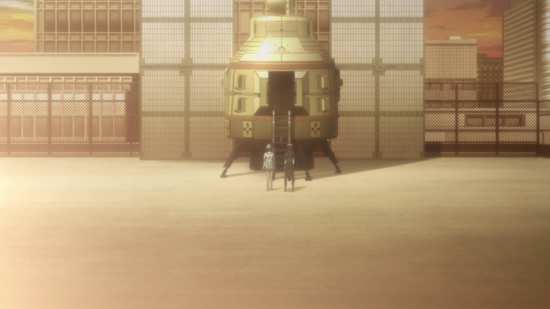 Steins;Gate 0 is a diversion, literally so, in the original Steins;Gate series. Episode 23 comes along in that show, and instead of acting in the way that he should, history gets knocked off track resulting in this Steins;Gate 0 story which is all about getting history back on track, so episode 23 of Steins;Gate ends in the way that it should. It’s like someone seeing their life flash before them just before they die. Have an eventful enough life, and that flashback could conceivably last a whole other lifetime in that blink before death. With that in mind, it is very hard not to see Steins;Gate 0 as ultimately rather sterile, and unsatisfying, a closed loop that has no real effect on the story. It’s a chance to spend another 24 episodes in the company of the characters that fans got to know and love in the original series, but the premise of the story is such that those characters aren’t quite the same. Steins;Gate 0 is a decent series that rewards the time that you invest in it, but feels pointless nevertheless.