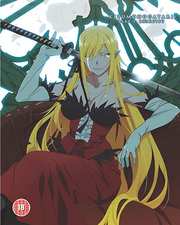 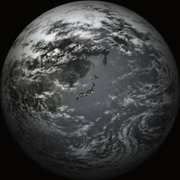 Ever since I watched the original Bakemonogatari series, I have been intrigued by the back story of Koyomi Araragi, and the vampire Kiss-shot Acelora-orion Heart-under-blade, and how when he gained vampiric powers she became eternally linked to him. It took a good while, but that story eventually made it to screen when this Kizumonogatari feature film trilogy was made. The trilogy has taken its sweet time in getting here, but with this third part, we can finally see how the adventure all began.

When Koyomi Araragi discovers the vampire Heart-under-blade in a pool of her own blood on a subway platform with her limbs missing, he agrees to let her drink his blood to save her life, even though it means losing his.

Losing his normal life it turns out, as he’s now a vampire himself, ill advised to get a suntan. Heart-under-blade has managed to restore her limbs, but only has enough power to manifest as a little girl; Araragi has most of her strength now, and she needs him to find the three vampire hunters who took her limbs, and to get them back. If he can do that, she’ll restore his humanity.

In the third film, Reiketsu, Koyomi Araragi learns that regaining Kiss-shot’s limbs was the easy bit, and that becoming human again may entail a price that he’s just not willing to pay.

The Monogatari anime series had a conceit where the aspect ratio would switch to scope for a flashback sequence. As Kizumonogatari is essentially all a flashback, the transfer on this disc is a consistent 2.35:1 widescreen 1080p transfer. It may be a single layer disc, but this film is a little over an hour long, and the bit-rate hovers around the 30Mb mark throughout. It’s an excellent transfer, bringing across the familiar characters and world with a fair bit more depth and detail, while the colour palette is limited, or rather tuned to give each scene a certain theme or mood. There might be a hint of banding in an odd frame or two, but it is decidedly minimal.

You have the choice between a very throaty DTS-HD MA 5.1 Surround Japanese track, and a comparatively weedy DTS-HD MA 2.0 Stereo track (the latter seems fixed at 0.4Mb per second and might just be a mislabelled DD 2.0 track instead). You also get optional English subtitles. The surround track is excellent, immersive and effective, while the subtitles are accurately timed and free of typos. There’s not as much screen text to translate as in the TV series but you might need to press pause once or twice during the film.

The disc presents its content with an animated menu, but on insertion will instead autoplay the film. The extra features on disc amount to 4 varieties of trailer and similar promotional material.

I haven’t seen the physical extras that come with the collector’s edition to comment.

Remember the disappointment of the Star Wars prequels? Fans got excited at finding out just how the Skywalker saga began, and while the prequels delivered disappointment in many forms and flavours, my personal annoyance with the prequels was they spent six hours basically repeating what Obi-Wan told Luke in Return of the Jedi. There was nothing unexpected. The Monogatari franchise stands in stark contrast to that. There have been many hints and suggestions of what happened between Araragi and Kiss-shot before the story began, but certainly not enough to craft a story upon, and there has been much room for speculation for fans of the franchise. The three films of Monogatari have managed to impress me twice over, in giving me a story that I completely didn’t expect, and on top of that, being better than anything I could have imagined.

The first film introduced the characters, focusing on Araragi and Hanekawa at first at the start of their flirtatious friendship, before Araragi encountered the vampire in a state of dismemberment, and desperate to stay alive. She turned Araragi into her minion, drinking his blood to heal herself, and setting him forth to regain her lost limbs to restore her true strength, and with the promise of restoring his humanity. The second film followed that hunt, as Araragi fought against the vampire hunters to get back her limbs.

We begin this third film with that battle over, her limbs returned, and her true form, her true power restored. All that’s left is for Araragi to become human again. When the story began, a spotlight was shone upon Araragi’s depression, and the thought that he chooses to help the underdog to give him some sense of self-worth. Certainly his choice to save Kiss-shot was motivated by that. That’s thrown into his face when Kiss-shot gains her true strength and original form, certainly no longer an underdog. In fact, Araragi gets an abrupt introduction to the true nature of a vampire, and he has to question whether he made the right choice to begin with.

He’s thrown into a crisis, as he has to figure out what to do, as well as come to terms with the fact that as a vampire himself, he too will be subject to the same instincts and needs as Kiss-Shot; it won’t be too long before he is a monster too. It seems his only choices are to become human again, and turn a blind eye to all the lives that will be lost because he let Kiss-shot go free, or remain a vampire and do something to stop her. Once again, it’s Tsubasa Hanekawa that gives him the perspective he needs, in typical Monogatari style. The film has its moment of fan service glory.

As you might hope, Kizumonogatari ends with the kind of brutal, gory, action-packed action sequences that two immortal vampires would deliver. It’s brilliantly animated and enthralling to watch. But what makes the franchise so special is that it is always character focused, and how the story gets to its conclusion harks back right to the beginning of the movie and before, asking the question of just why such an immortal, and all powerful vampire like Kiss-shot was in such dire straits in that subway station to begin with. It turns out that she has much in common with Araragi when it comes to her motives, and it really does explain why the two are bound together in the series in the way that they are.

The Monogatari franchise hasn’t all been consistently brilliant, although generally the series are a cut above the rest. Sometimes you get instalments that love the verbiage a little too much, sometimes the fan service takes over, but some, like the original Bakemonogatari can’t be faulted in storytelling and quality. The Kizumonogatari feature film trilogy is for me the pinnacle of the franchise. Not only does it have all the essential Monogatari ingredients in just the right ratio, it delivers it in a great, concise, three hour narrative, with great, theatrical feature film production values as well. If you’re into Monogatari, this feature film trilogy is quite simply essential.