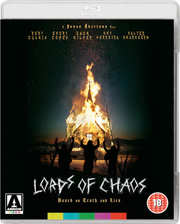 Review for Lords of Chaos

Lords of Chaos is a musical biography depicting the Norwegian Black Metal music scene from the late 1980s and early 1990s. The film follows the rise of the band Mayhem who were one of the most prominent features of this scene due to a number of horrific moments that are notorious in the music business, but this was not because of their music.

Euronymous forms a band Mayhem with his friends Necrobutcher and Manheim (who leaves and is replaced by Hellhammer) and joined by a singer from Sweden called Dead. The style of music they play is Black Metal which is an extreme version of the Metal that most people may not be used to, but they build momentum in the music scene with their extreme concert performances highlighted (if that’s the right word) by the antics of the Dead who would cut himself on stage and throw pig’s heads into the frenzied audience.

After a show, the band encounter a fan called Kristian who Euronymous dismisses as a poser. While recording in a house in the woods, Dead, being left alone horrifically kills himself. This has an effect on all the band, especially Euronymous’ reaction to it at all as a great publicity stunt, which prompts Necrobutcher to leave the band.

Following this, the band become even more notorious and Euronymous starts his own label and record shop called Helvete (Hell). This becomes a meeting place for all the Black Metal bands and here he again encounters Kristian who has now renamed himself as Varg Vikernes. He has created his own one-man band Burzum whose music Euronymous agrees to release on his label as long as Varg will pay for it. Varg also joins Mayhem to record their first album De Mysteriis Dom Sathanas.

Lords of Chaos is a strange film, but also a very enjoyable if deeply troubling one. I remember many years ago reading an article on the Top 10 Controversial Album Covers of which Mayhem’s Dawn of the Black Hearts ‘won’ (Note: Don’t Google this image unless you have a strong stomach) and I became fascinated with this band that I had never heard of and the music that I had never heard either. The story of Dead, Euronymous and Varg Vikernes was amazing and I am surprised it has taken this long to be made into a film.

Through the entire film, the story is told from Euronymous perspective. Maybe one of the issues I have is that it should have been a film with multiple narrators as there are moments with other characters (especially Varg and Faust) where it would have made more sense to have seen that scene from their point of view. This could have helped understand the motives behind certain things that happened.

That being said, this film though enjoyable is a very odd one from the context of an outsider. The film doesn’t really have much to say and though the acting is great and the scenes are intense, there are moments when you wonder what the purpose of the film was. This could, and probably should have just been a docu-drama with interviews with those involved, but I can understand them wanting to show everything that happened with this band and the people involved.

There is a lot of Special Features included which is great. I do wish a full Making of or maybe an overview of Mayhem as a band would be great as the absence of any input from any of the remaining members is a shame. It would have been nice to have heard their opinion of the film, good/bad or indifferent.

There is an interview with Writer/Director Jonas Akerlund. This is more a look at his career in the music business and how he got into making music videos and into filmmaking. It is fascinating to hear him talk about how he lived through all the events of the film and knew many people involved. This gives the film a lot more credibility. It is a shame that he did not contribute a commentary as I think he could have talked for much longer about the making of the film.

From the Dark Past is an interview with jason Arnopp who plays himself in the film. He is a journalist who wrote for Kerrang! which was the UK's main magazine for Rock and Metal. Within the film he contacts Euronymous regarding the Black Metal scene. It is fascinating listening to how he became aware of Mayhem and how his work with Kerrang! lead to him contacting the band regarding all the things that were happening.

Son of Satan is an interview with Arion Csihar who plays his father Attila in the film and he clearly enjoyed making the film and liked the idea of playing his father when he was in the band.

A Dangerous Meeting is an interview with Sam Coleman, who plays Metalion in the film. Who? Yes. I was thinking the same. I had to look him up to even figure out who he was playing. He is the 'Groupie' character who helped promote the music scene and took pictures of them. He is interesting to hear how he came to film and how he approached, but certainly not full of stories.

Carnage is an interview with Special Effects artist Daniel Martin. Much like Akerlund's interview this was more a look at how his career started. It was interesting to see how much make-up effects went into making the film. If you want to know how they created certain special effects, you will enjoy this. For me, this spoilt a lot of the illusion, but I do appreciate the amount of practical elements used rather than just relying on CGI.

Thurston Moore (Guitarist for Sonic Youth) introducing the film at the Rio Cinema London in 2018. This is odd. He clearly has a love for the subject matter of the film, but his presentation walking around the stage aimlessly is hard to follow. This should have just been a stand-still introduction and is just not worth watching.

There are ten minutes of Outtakes which is really just alternate takes and mistakes and some deleted scenes all mixed together. These are fine, but none of the extra parts are things the film needed. Finally the set includes Image Galleries and Original Trailers and Teasers which are nice, especially the quick introductions to characters which helped with the marketing of the film and establishing what and who the film was about.

Lords of Chaos is a great film for those who want an intense ride. I would recommend to get the most out of this film go and read the Mayhem Wikipedia page first, just so you know what you are getting yourself into. It is not a film to go into lightly, this is not the triumphs of a Bohemian Rhapsody or the amusing fantasy of Rocketman, but as close to a horror film that a musical biography could get.