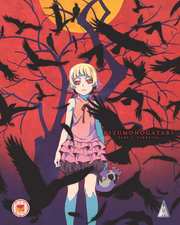 Light novels and anime adaptations have an odd relationship at times. Just like any narrative, the quality of the storytelling needn’t be consistent; all the writer has to do is to hook the reader with a strong opening, and they’ll hopefully invest for the long run. When it comes to fan service shows based on light novels, it’s less of a concern, the anime sells on the saucy imagery more than the story, which explains why they keep on making High School DxD anime. Where the story is more important, the fall off in quality can be quite significant. When it came to the Melancholy of Haruhi Suzumiya, they adapted all the good bits for the show’s first season. All they had left for the second season was Endless Eight and Sigh, and the less said about those the better. Luckily they had Disappearance for the feature film...

A light novel series to buck the trend is Monogatari, from Nisioisin. Its blend of supernatural storytelling and quirky characters has been a highlight of the anime release schedules for several years now, beginning with the genre defining Bakemonogatari. Through the various iterations, we’ve had allusions and references to how it all began, to when Koyomi Araragi first encountered the vampire Kiss-shot Acerola-orion Heart-under-blade, and had his life changed forever. Kizumonogatari finally delivers that story in three feature films, of which Tekketsu is the first part. Up until now, MVM have been sharing the disc authoring with Australia’s Hanabee Entertainment, but for Kizumonogatari, they alone have commissioned this disc for the UK market.

You might wonder just what Koyomi Araragi is going through at the start of this first film, reluctant to make friends (although Tsubasa Hanekawa manages to get under his skin long enough to wear him down). When he discovers the vampire Heart-under-blade in a pool of her own blood on a subway platform with her limbs missing, he agrees to let her drink his blood to save her life, even though it means losing his.

Losing his normal life it turns out, as he’s now a vampire himself, ill advised to get a suntan. Heart-under-blade has managed to restore her limbs, but only has enough power to manifest as a little girl; Araragi has most of her strength now, and she needs him to find the three vampire hunters who took her limbs, and to get them back. If he can do that, she’ll restore his humanity.

The Monogatari anime series had a conceit where the aspect ratio would switch to scope for a flashback sequence. As Kizumonogatari is essentially all a flashback, the transfer on this disc is a consistent 2.35:1 widescreen 1080p transfer. It may be a single layer disc, but this first feature in the trilogy is a little over an hour long, and the bit-rate hovers around the 30Mb mark throughout. It’s an excellent transfer, bringing across the familiar characters and world with a fair bit more depth and detail, while the colour palette is limited, or rather tuned to give each scene a certain theme or mood. There might be a hint of banding in an odd frame or two, but it is decidedly minimal.

You have the choice between a very throaty DTS-HD MA 5.1 Surround Japanese track, and a comparatively weedy DTS-HD MA 2.0 Stereo track (the latter seems fixed at 0.4Mb per second and might just be a mislabelled DD 2.0 track instead). You also get optional English subtitles. The surround track is excellent, immersive and effective, while the subtitles are accurately timed and free of typos. There’s not as much screen text to translate as in the TV series but you might need to press pause once or twice during the film.

The disc presents its content with an animated menu, but on insertion will instead autoplay the film. The extra features on disc amount to 10 varieties of trailer and similar promotional material.

I haven’t seen the physical extras that come with the collector’s edition to comment.

The Monogatari franchise has been tempting us with the story of how Araragi became a vampire and fell into all this supernatural mayhem since the start of the Bakemonogatari series. That came out in the UK back in 2013, so you can imagine the anticipation that has been building ever since. I have to say that on the strength of this first film in the Kizumonogatari trilogy, this is really going to fulfil those expectations and then some. About the only criticism I might have is the run time of the film, which is scant at just 60 minutes. Either narrative or financial choices determined the splitting of Kizumonogatari into three instead of two features, although I guess you might just call the whole trilogy one movie, of which this is the first act.

With that in mind, you can guess that this is really about introducing the characters and setting the stage. Tekketsu does it typically well though, with a practiced eye to characterisation making this an interesting and entertaining film to watch. We’ve seen in previous instalments of Monogatari that Koyomi Araragi had a negative experience in Middle School, which dictates how we meet the character as he starts High School here. He’s introverted, unwilling to connect and make friends, although it’s a timely bit of fan service that makes him fixate on Tsubasa Hanekawa long enough for her to return his attention at the start of the film. As well as hearing the rumours about a vampire on the loose in town, he manages to make his first friend in school.

It’s that introversion and depression that informs his decision when he finally does encounter Kiss-shot Acerola-orion Heart-under-blade who we would later know as Shinobu Oshino. The vampire is in a bad way when we see her, bereft of her limbs and as close to death as she can get. That late at night, Araragi is her only chance, and her vampire arrogance turns to desperation. But you do have to wonder just what kind of bad place Araragi is in to contemplate sacrificing his life to save hers. He doesn’t know that it’s his human life that he’s losing; that he’s ‘gaining’ existence as a vampire instead.

He has a chance of becoming human again, if he can find the hunters that attacked Kiss-shot and retrieve her limbs. Given what they did to her, he doesn’t have much hope, and his first attempt leads him into a whole heap of trouble. But there is an unlikely saviour on his side...

Kizumonogatari’s first part really does impress with its characteristically quirky visuals, an engaging story, and really interesting characterisations. While the Monogatari franchise has consistently been of high quality, there are the odd outlier episodes, the ones that go for a little too much fan service, or become too fond of their verbiage, or lose the balance in the shift between character and narrative. Kizumonogatari – Tekketsu avoids this and instead provides one of the best parts of its franchise. Hopefully the next two parts of the film are just as enthralling.