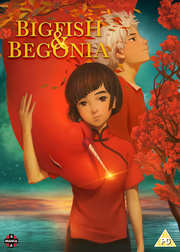 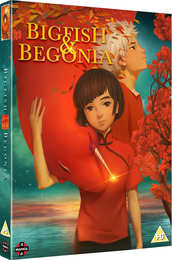 I don’t know why it is, but my biases start to show whenever Manga Entertainment step outside what I’ve come to accept as their sphere of operation, that of releasing Japanese anime to the UK market. That’s despite me owning a couple of graphic novels from the Manga label back in the nineties, that’s despite them releasing a few US animations, most recently My Entire High School Sinking Into the Sea, and even a British animation. This time my bias was doubly reinforced when I learned that Big Fish and Begonia was a Chinese animation. I haven’t a lot of experience with home-grown Chinese animation, aside from a couple of flash animated Youtube shorts I might have streamed. I always thought of China as one of the countries to which Japanese animation studios outsource their in-betweening work. Basically the bricks and mortar people, not the architects.

When Chun is 16, she too travels to the human world, and notices that she’s welcomed by a boy and his young sister, who apparently watch the waters each year for the coming of the dolphins. But seven days later, when it’s time to return, Chun learns of the unwelcome side of humanity, when she’s caught in a net near the maelstrom that leads home. The boy she first saw witnesses this and dives into the ocean to cut her free, but he dies in the act.

When Chun returns home, she’s distraught, and trades half her life to bring the boy back. In her world, the boy is brought back as a fish that she names Kun, and told that it’s her responsibility to raise the fish, protect him until he’s large enough to return to the human world where he will be restored as a human. But by making this choice, Chun might have doomed her own world.

Big Fish and Begonia gets a 2.35:1 widescreen 1080p transfer on this disc. The image is clear and sharp, the colours are lush and vibrant, and there are no problems with visible compression or aliasing. If there is banding, it’s really only a minor issue on this Blu-ray. The animation is gorgeous; appealing character designs that have an anime aesthetic to them, but given detail and motion that goes beyond what you might expect from an animated feature from Japan, approaching Disney levels of complexity at times. The world design is fantastic in the true sense of the word. You’ll have to look to something like Ghibli’s Spirited Away for a similar level of imagination and creativity. Chun’s world is a breathtaking creation that entrances, given this Blu-ray presentation.

The images in this review were kindly supplied by Manga Entertainment.

You have the choice between DTS-HD MA 5.1 Surround, and PCM 2.0 Stereo in both Mandarin and English, with optional translated English subtitles. I suppose it is a little rich to hope for Dolby Atmos from a Manga Entertainment/Shout Factory disc, but when you see the logo in the end credits your expectations begin to rise. Having said all that, the Mandarin surround track that I chose to listen to is an excellent one, truly immersive and powerful. The film gets a rich and vibrant sound design that matches the fantasy world that is presented on screen. It’s one of the best surround tracks I’ve heard on an animated feature.

The disc boots to an animated menu.

The Making Of lasts 15:24 and is presented in 1080i 50Hz. It looks at the process of making the film over a period of some 12 years, the difficulties of proving Chinese animation is of world standard, getting the funding, keeping the team going, and eventually resorting to kickstarting the production. It’s an amazing learning curve that the creators go on, and they did indeed start with the sort of short flash animation I mentioned in my preamble.

Speaking of which, you get to see the original Big Fish and Begonia Short film from 2004, genuinely animated in Flash. This lasts 7:28 and again is in 1080i 50Hz.

That was spectacular. Big Fish and Begonia is a breathtaking visual spectacle on an epic scale, a collision of worlds and ideas that makes you feel that you have to hold on for dear life to appreciate. But what they get so right is in centring the story on the characters. At the heart of it all, it’s a tale about a girl and a boy, or rather a girl and two boys. The emotional narrative drives the story, and you’ll be hooked for every up and down, every reversal and plot twist. What amazes me most is the steep learning curve that the creators went on. Twelve years previously they had been making rough and ready Flash animation for online streaming, and with Big Fish and Begonia, they’ve created a world-beating animation, rivalling the best that can come out of Japan or the US.

One issue is that the film doesn’t offer an easy route into its story. It begins with a text preamble that sets the nature of these two worlds up, and it is rather convoluted and elaborate. Chun’s world is set up as a combination afterlife and Mount Olympus, although Chun’s people are less gods than they are guardians of nature. But in terms of the way that they interact and interrelate, they are more human than not, albeit people with magical powers. Families raise children, and those children when they reach the age of sixteen must undertake a rite of passage, travelling to the human world in the guise of dolphins.

When a human boy sacrifices himself to save Chun, it drives her to set things straight, despite the prohibition against interacting with humans. The souls of the dead wind up stored in a certain part of her world, and she makes the journey, and a deal to resurrect the boy, although in her world he comes back as a fish that she must raise and protect before he can be returned the human world. In her world, the fish has magical powers too, and grows quickly, but the resurrection of a human isn’t exactly allowed, and people see the fish as a monster, and turn against her as well. It’s her grandfather who gives her the confidence to stay true to her convictions.

Fortunately she also has the help of her childhood friend Qiu, and it quickly becomes clear that Qiu has feelings for Chun, if unrequited, making Chun’s affection and devotion to the fish, Kun something of a sticking point between them. It’s a complex relationship that develops as they try to raise Kun in secret.

Big Fish and Begonia’s main message is one of love and sacrifice, staying true to one’s beliefs, but counterpointing this is a message about nature, about how sudden change and flouting natural law leads to devastating consequences, such as the consequences that befall Chun’s world following her choice to save Kun. Admittedly it’s not all her fault, as there are those who facilitate her choices, and those that take advantage of her. But the ecological message is delivered with clarity and with enough of an allegorical interpretation to avoid becoming preachy.

When I first placed the disc into the player, I had this preconception, that I’d be comparing Big Fish and Begonia to all the anime that I watch, all of the feature animations that I’ve seen from Hollywood, and wondering if it could ever live up to those films. One hour and forty-five minutes later, and it’s clear that Big Fish and Begonia has laid down a gauntlet to the rest of the world. Everyone else is going to have to up their games if China keeps producing animation of this quality.