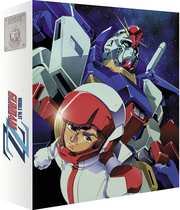 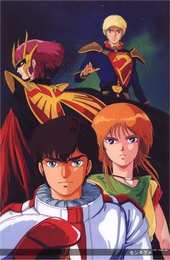 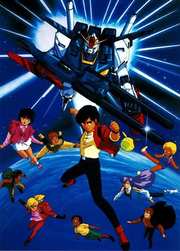 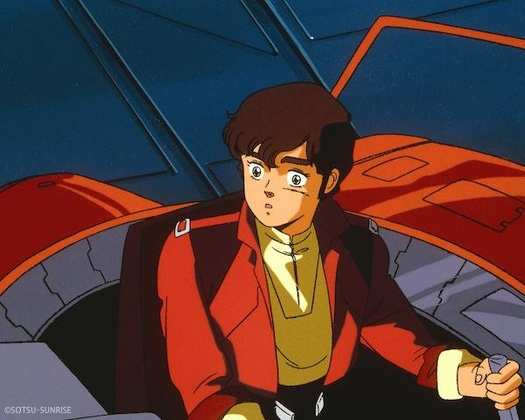 I’ve really been enjoying the old-school Gundam franchise, with thanks to Jitendar Canth, our neighbourhood anime expert, who was kind enough to send me both the Mobile Suit Gundam Movie Trilogy Box Set (a condensed re-telling of the original Mobile Suit Gundam Series across a trio of 2 hour ‘films’) and its immediate sequel, Mobile Suit Zeta Gundam, albeit Part 2 only. So it made good, logical sense for me to cover that sequel’s sequel (does that make sense?) here with Mobile Suit Gundam ZZ. This particular review is for the UK released Blu-Ray for part one only (the first 22 of 47 episodes), although part 2 is imminent, with a slated release date of 20 November this year.

Mobile Suit Gundam ZZ (double zeta for those in the know), was the third series to be released, following the success of the first and second. It first aired in Japan in 1986, a mere 31 years ago, and very much picks up the series where it last left off, albeit with a slight change to character styling; a nudge away from the relatively primitive anime style of the first two series (which have a ‘Speed Racer / Marine Boy’ look and feel with very static animation) towards something closer to contemporary anime with more fluid movement. But it really is just a nudge. It still looks pretty old-school for the most part which is fine by me, and which remains part of its charm.
Hilariously, each episode kicks off with a song (which you’ll never shake off; believe me,I’ve tried) which according to the subs, repeats the refrain: “Not an anime. Not an anime. Not an anime. Not an anime. It’s true!” over and over again. Which is strange. Because it clearly is an anime. But hey-ho. 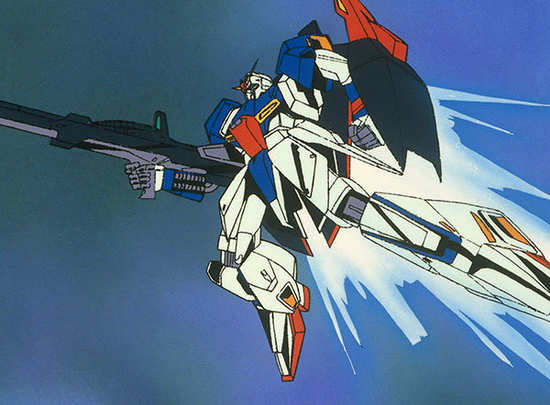 The series kicks off with pretty much a precis of the previous one; almost the entire opening episode is devoted to it. What this does do, apart from bringing you up to speed with the story, is highlight the lift in restoration quality of everything that follows, which seems much crisper and cleaner by comparison, with better colourisation, detail and contrast.

The new series starts at almost precisely the end point of the previous one. . I don’t think it’s necessary to have seen the series prequel to join in the fun, though it would certainly help make some sense of the show’s nuances – though it’s not a particularly complex narrative.

The Argama, the giant ship captured by Bright Noa, docks into ‘Side 1’, a self-contained off-planet, man-made world (effectively a giant self-contained ship in its own right). It has just concluded a battle which has left the pilot of the Zeta Gundam, Kamille Biden, in a coma like state, unable to move or communicate. 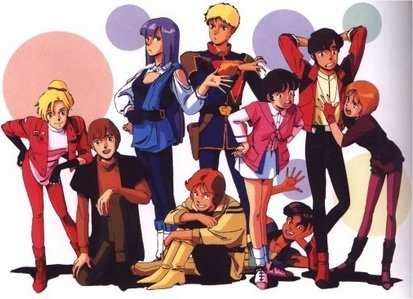 A ‘native’ of Side 1, is a boy called Judau Ashta, who in the absence of any parents and with a young sister (Leina) to care for, skips school to hunt scrap metal in order to pay their way. Like many young men, he’s pretty fearless and gung-ho and while working he discovers a battle escape pod which he retrieves, only to discover it’s actually still occupied by a Titan soldier, Yazan Gable.

Yazan persuades Judau to try and steal the Zeta Gundam (a legendary mobile suit, like a giant robot which you climb into to control) from the Anti-Earth Union Group which he does, but with no intention of passing it on for battle, but rather to sell for scrap. When he gets his chance, it becomes clear that Yazan is taking no prisoners so Judau jumps inside the mobile suit and, somewhat surprisingly, beats Yazan into submission. Who’d have thought it? Maybe Judau is a so called ‘New Type’ who just instinctively know how to use the suits – a concept pre-dating ‘digital natives’ by some two decades! 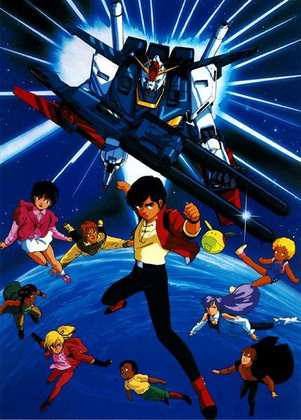 Shortly after, a ship from Axis Zeon arrives in Side 1, with a comedically ‘serious’ Captain, Mashymre Cello, who is utterly devoted (well, obsessed with) to Harman, the beautiful Zeon leader. In a briefing she gave him a rose which he had preserved and which he wears on his uniform at all times, smelling it for inspiration.

So then the scene is set for what appears to be a three-way battle (four if you count the original owners) for the Zeta Gundam mobile suit. Judau becomes so adept at piloting the suit that he is invited to join the crew of the Argama, something he resists until he is persuaded by his sister that it would be good for them both.

One of the strengths of the Gundam series is the individuality of its characters and this series is no exception. Each are perfectly formed and part of its rolling charm is that you get to know each pretty well as the series progresses. So it’s no surprise that part way through, another character emerges, seemingly from nowhere, to help Judau and Gundam Z during the most arduous space battles. Roux Louka, originally a crew member from the La Vie en Rose, Is not just a pretty face. She is a staunch ally in the battle for justice and fearless in her support.

During one battle, there is an amazing transformation (Transformers anyone?), where Judau’s new mobile suit becomes even stronger; the so-called Double-Zeta (hence the series title), with Roux now piloting the original Zeta Gundam. Which means they become quite a formidable duo.
One of the Zeo soldiers, who has caught a glimpse of Roux in battle and has fallen hopelessly in love with her, attempts to kidnap her but ends up kidnapping Leina, Judau’s little sister, instead. That means the team have to go all out to rescue her, whatever it takes.

As is common with the previous series, the whole is far less than the sum of the parts – it’s a series that rolls on, episode after episode, delivering drama, humour and tons of mecha action. Wlthough the narrative may progress slowly, the individual episodes are anything but slow. It’s a lot of fun and a really easy, ‘turn off your mind and enjoy’ kind of a watch. The stuff you’d watch on a Saturday morning as a kid.

Image quality, after the first episode, settles down to be really excellent and the audio, Japanese only with subs (English or French) is very acceptable too. It’s a shame that the series is broken down into two parts but I guess I shouldn’t complain. Remember the days when anime was generally released three episodes at a time? Apparently, this first set comes in a box ready to house Part 2 so I guess that’s something. There are very few extras here other than the usual (pointless) textless opening and closing sequences and TV spots.

I’m really looking forward to the second part of the series; less to find out ‘what happens next’ and more to immerse myself into the rolling flow of space opera, mecha-action that the Gundam series, thus far, seems to deliver.