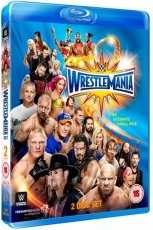 I feel like every year I start the review of Wrestlemania the same… The legacy of the event is set in stone so that the only events that can compare it to such as The Superbowl or the Grand National. For many their wrestling year pivots on how good this event is, however after the past few years I have accustomed to being disappointed by the event.

This event was no different.

It had some great matches, some amazing memorable and halfway through the event I was considering this as one of the best I had seen in a while… but then the final few matches just destroyed all that goodwill and ended with one of the most miserable, depressing matches I have seen in a long time. It was so disappointing as the event and the build held so much promise.

The entire Kickoff Show is included as a Special Features which is strange and really they should have just started with this as it would have done if you watched live. By doing this, it makes the matches seem throwaway, which is a slight against them. Particularly the Cruiserweight Championship Match between Neville vs. Austin Aries which I honestly thought would be a 2-3 minute match, but was actually given the time to breathe and was really an enjoyable match. The Andre The Giant Memorial Battle Royal was throwaway as it is every year and really Mojo Rawley winning was a bit bizarre and nothing has come from this.

It is surprising that the Intercontinental Championship Match between Dean Ambrose vs. Baron Corbin was not on the main card as they are two popular stars with a good feud going into this match. However, the match itself was pretty by the numbers with nothing really to talk about.

Getting on to the main card we started with the New Day hosting, which if I’m honest was a little pointless and a waste of a great team (unsure whether they were injured and could not compete). They appeared a few times (not much of a host?!) and didn't contribute much in regards to entertainment.

Shane McMahon vs. AJ Styles was a phenomenal match (pun intended). I really did not expect this match to be this good and was blown away by how Shane was able to hang with AJ Styles in this match.

United States Championship Match Chris Jericho vs. Kevin Owens was a match that I was looking forward to… until Owens lost his title. It was at that point this match lost something. Maybe Owens should have cost Jericho his belt so that it was a real revenge on both sides match. However, both are great and this is a real highlight of the night.

Fatal 4-Way Elimination Match for the Raw Women’s Championship Bayley vs. Sasha Banks vs. Charlotte Flair vs. Nia Jax was a great match and I am so glad that WWE did the right thing by Bayley, despite how much she got short changed with her entrance? This was also much too short for an elimination match.

Ladder Match for the Raw Tag Team Championship Luke Gallows & Karl Anderson vs. Enzo Amore & Big Cass vs. Cesaro & Sheamus vs. The Hardy Boyz should have been Match of the Night as it certainly was the shock of the night with the returning Hardyz. I surprised by this match, but it felt a little by the numbers, too short and certainly not like any of the previous ladder matches that have stolen Manias in the past.

John Cena & Nikki Bella vs. The Miz & Maryse was simply painful to watch. This match was setup simply for the proposal between Cena and Nikki and if this had been an episode of Raw or Smackdown it would have been fine, but this was Wrestlemania and didn't deserve this.

Non-Sanctioned Match between Seth Rollins vs. Triple H was a great match and though I think it could have been better I did enjoy everything about the match itself and it really was great for their feud. The ending Pedigree reversals spot was one of the best things I have seen.
WWE Championship Match between Bray Wyatt vs. Randy Orton was a waste of a great feud. I just don't know what I am supposed to think about this and the whole ending was so insane I'm not sure who that was supposed to be for. Remember this is the WWE Championship. This is the belt linearly that Hulk Hogan and Bruno Sammartino held and yet it is not the main event?

Universal Championship Match with Goldberg vs. Brock Lesnar was such a surprising match. It was short, which was expected, but not as short as most of Goldberg’s matches. I actually enjoyed it.

6-Pack Challenge Match for the SmackDown Women’s Championship Alexa Bliss vs. Naomi vs. Becky Lynch vs. Mickie James vs. Natalya vs. Carmella could have been a great match, but instead was just a cluster of moves and spots. It felt like a Cruiserweight match, just not a very good one. However, I am glad at the ending.

No Holds Barred Match between Roman Reigns vs. The Undertaker was possibly one of the worst booked endings I have ever seen in my entire. I wish it had been promoted as potentially The Undertaker’s final match as by the end I felt deflated by what I saw. If this was supposed to be the passing of the torch to Roman Reigns then it failed… this has been highlighted by how much Reigns then was destroyed by Strowman in subsequent months.

This match was overlong and seeing The Undertaker get beaten up by a man 20 years younger was not as entertaining as whichever moron who booked this thought it would be. I cannot understand why this was booked in such a way to the point where no one benefitted. This was not the send off that Ric Flair or Shawn Michaels received and certainly not the passing the torch like Warrior or John Cena. This was just bad and not how they should have ended either The Undertaker’s career… or indeed Wrestlemania.

The Hall of Fame was pretty stacked this year with a few who could easily have been the Main Eventer. Obviously, the headline was the returning Kurt Angle who has such an amazing career and it was great to see him again.
Diamond Dallas Page and Ravishing Rick Rude are great additions, as are the Rock N Roll Express.

Teddy Long is a nice addition and hopefully more Managers and Referees get recognition too. I think it’s a little early to induct Beth Phoenix, but I don’t disagree that her legacy deserves to be honoured as is Eric LeGrand which is a nice thing. However, I do wish that the WWE would stop lumping nine random stars in the ‘Legacy’ group. Some I can understand that people might not know them, but to do this to the likes of Toots Mondt who was a major figure in the creation of the WWWF.

The only other Featurette included is The Miz & Maryse Mock “Total Bellas”. Now if they had included all of the skits (I think there were 2-3) it would have been great, but just including this random last one makes no sense. The whole ‘John Cena House Rules’ is not funny if you haven’t seen the previous one that sets this up. However, Miz and Maryse are fantastic in their parody of Cena and Nikki Bella as well as Daniel Bryan and Brie Bella. Just a shame that this is all that is included as I expected some backstage interviews, maybe even a few moments with The Undertaker or people commenting on his legacy.

Wrestlemania 33 was an odd show. For the most part it was full of fantastic entertainment. Some great matches and moments and certainly is memorable for them. The redebut of The Hardyz is probably one of the biggest pops I have heard in years. However, the two world title matches left a lot to be desired and the Taker/Reigns match meant that this event ended quite bleak and sombre.

I think this is probably an event I will cherry pick in regards to what I watch again. The set itself does include one of the strongest Hall of Fame classes I have seen in a long time. If you are a huge fan of wrestling you will already have this reserved to buy, but if you are more selective you may want to give this thrill ride a miss as the ending is more of a crash than a soft landing.