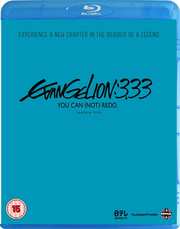 Review for Evangelion 3.33 You Can (Not) Redo

I’ve been procrastinating again; trying to get this review started a couple of days after watching the movie. I just can’t get the urge to start typing. Then again, procrastination seems to dog the Evangelion movie rebuilds. We’re now getting the third film on Blu-ray and DVD, four years after its cinema release, four years after fans first saw it in the UK at events like Scotland Loves Anime, and over two years after its release was first scheduled by Manga Entertainment. Fans started calling it ‘You Can (Not) Release’ and other ironic monikers when the delays first started happening, but the last year or so merely resulted in a weary sigh, and tired eye-roll. It seems the director Hideaki Anno and Studio Khara want as much ownership of the film as possible. Funimation actually had the film dubbed early on, and that dub actually even played in a couple of theatres, but Studio Khara weren’t happy, and demanded revisions both to it, and to the subtitle translation. This, despite having given their blessing (or turned a blind eye) to the first two films as released by Funimation. The two year delay has been because Studio Khara have been overseeing the re-dub, and the new subtitle translation, and it’s only now that they’ve okayed it, that we can get to watch Evangelion 3.33: You Can (Not) Redo on home video. Despite having re-watched them twice in the interim, I’m kind of hazy on the first two movies, so it will take me a while to get back into the flow of things.

Shinji wakes up in an unrecognisable world. He’s aboard a gargantuan ship, the flagship of a powerful fleet that does battle with the enigmatic Nemesis. It’s part of a group called WILLE, and the ship commander is none other than Misato Katsuragi, and under her command are Asuka and Mari along with their Eva units. And Shinji is persona non grata; no one’s even eager to fill him in on what has happened. For one thing, fourteen years have passed, although Shinji hasn’t aged; none of the Eva Pilots have aged, and WILLE actually stands in opposition to NERV. The last thing Shinji remembers is climbing into his Eva to rescue Rei Ayanami. What he doesn’t realise is that he brought about an abortive Third Impact, and the devastated state of the world is what resulted. WILLE doesn’t want that job to be completed, and so have placed an explosive collar around Shinji’s neck, to be detonated if he goes near any Evangelion, or tries to return to NERV. But Gendou Ikari and NERV have taken this into account. They know that Shinji’s need to find Rei Ayanami will bring him to NERV, where he will meet another Eva Pilot, Kaworu Nagisa, and the friendship they will form will be key to bringing about the Fourth Impact! 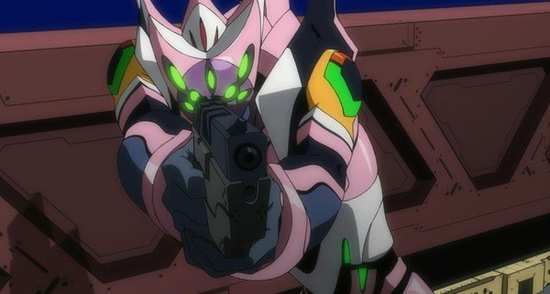 We go full on theatrical for the third Evangelion movie, as the aspect ratio switches to 2.40:1, presented on this Blu-ray disc at 1080p resolution. Other than the perennial issue with banding, noticeable only in couple of scenes really, Evangelion 3.33’s transfer is very sound. The image is clear and sharp throughout, detail levels are excellent, colours are rich and consistent, and the animation is smooth, energetic, and impactful. There is a whole lot of red in this movie, but there’s never a problem with oversaturation or colour bleed. While the action sequences are intense, particularly the orbital opening sequence, there are also little touches that stay in the mind, particularly Shinji and Kaworu’s duets at the piano.

The images in this review were kindly supplied by Manga Entertainment.

The disc boots up with a disclaimer underneath the copyright warning that the dub, and the subtitles have been reworked under Studio Khara’s guidance to truly conform to the creator’s intent, and that certain inconsistencies with the first two films might result.

You have the choice between Dolby TrueHD 5.1 Surround English and Japanese, with optional translated subtitles and a signs only track. Note that for the subtitles, you can also choose between the Theatrical Subtitles (which I assume are close to the subtitles used for the film’s original screenings) and Home Video Subtitles, which I guess got the full Studio Khara reworking. I gave both subtitle tracks a try, although I lacked the time to look over every minute word choice. One big difference is that the Home Video Subtitles translated all of the background chatter as well as the main dialogue (noticeable in the opening space orbit scene), while the Theatrical Subtitles just stick to the main dialogue. The subtitles are timed accurately, and are free of typographical error.

I opted for the original Japanese track, and it maintains consistency with the first two films of course. Volume levels are low on this disc, even for a Funimation release, and I had my home cinema up to two-thirds of maximum for the film to sound good (The English dub isn’t quite so quiet). Once the volume settings are sorted, the film sounds fantastic, with great surround presence, really driving the action scenes with vibrant sound design, and Shiro Sagisu’s music as perfect as ever. The one worry when Khara said that they would oversee the dub, was an excessively literal Japanese translation (see Love Hina to see how bad Japanese dub micromanagement can get), gutting the reality of the characterisations with clumsy phrasing at best, incomprehensible translation at worst. I am so relieved to say that didn’t happen here. The tweaks that Khara made to the dub is in the fine story detail, and the dub flows as well as ever, the voice actor performances are the primary concern, and it’s a typical high end Funimation dub for a high tier property. 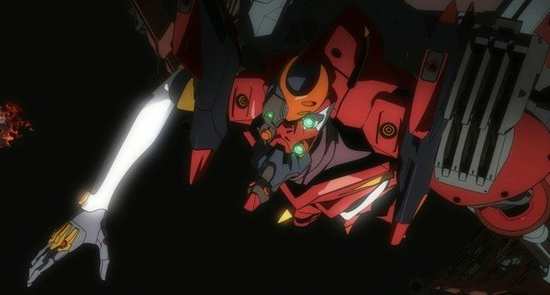 After the disclaimer, the disc boots up to a silent, animated menu. The extras are underwhelming on the disc (I don’t know about any physical extras Manga may have bundled with the Collector’s Edition), and really just amount to countless trailers for the film.

Of interest might be EVA EXTRA 08, which lasts 3:04, of which a minute is a countdown, followed by brief recaps of the first two movies, and a preview of the third. It certainly helped me get caught up prior to watching the film.

Rebuild of Evangelion 3.33 is a 10:56 showreel, offering comparisons of storyboards to final scenes, much as the Rebuild featurettes were in the first two films. One interesting aspect was that the piano duets were captured live action, and those scenes are compared to the final animation, which I guess was rotoscoped.

Finally there are trailers for Cowboy Bebop and Space Dandy (both Anime Limited titles in the UK), Dragon Ball Z Battle of Gods (available from Manga), and a spoiler strewn trailer for Hellsing Ultimate 9 & 10; seriously don’t watch it if you have an interest in the show, not that it’s been announced for UK release yet.

My procrastination comes down to not having figured out Evangelion 3.33 yet. I just don’t know how I feel about this film, just how it fits into the Evangelion universe. It seems an awkward stepchild of the first two films. The Evangelion Rebuilds have all been about revisiting the story in a new and refreshing way, giving established fans something they haven’t seen before. Evangelion 1.11 might have been a beat for beat remake of the first part of the TV series, albeit with a grand, theatrical and high production value gloss, but Evangelion 2.22 tore up that script and moved the story in a completely different direction. Not that it matters at this point, as the only thing you really need to know at this juncture is that 2.22 ended with Shinji getting into his Eva to rescue Rei Ayanami, and vanishing.

Evangelion 3.33 is an even more radical departure, as it time skips forward 14 years, and presents a whole new paradigm for the characters, new alliances and new enmities. And it’s damned opaque about how this situation came to pass, other than Third Impact. It’s a world shattering change certainly, but we don’t really learn a lot about those intervening 14 years. Not that there isn’t exposition in the film, but what we learn really applies to pre-Third Impact, with Shinji learning more about his past, his mother, and Rei Ayanami. 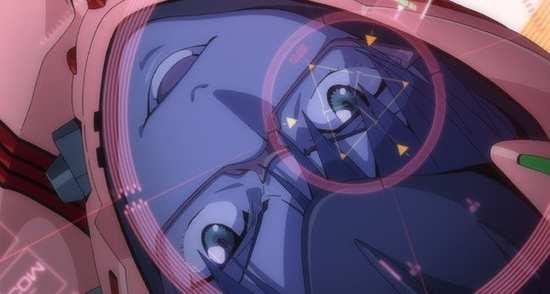 The problem for me with this film is that it really is a big question mark. There is so much new information presented here that just isn’t explained, or given sufficient context, that it becomes increasingly difficult to stay engaged with the film or the characters. The movie’s high point actually comes right at the beginning, with the orbital rescue mission against a blood red Earth, coming across as action-packed, majestic, triumphant. If this were another franchise, it would be how I’d want a Bond movie to start! But Bond movies usually top their pre-credits sequences. Evangelion 3.33 declines from that point, despite its action sequences and screen spectacle of a climax, because we never really get the context of the events, and it’s hard to care. When the To Be Continued sign flashed up at the end, my excitement level was at a minimum, not hyped for the final film as it should have been.

Despite the cold narrative of the film there are aspects to it that do appeal and intrigue, most notably the Kaworu character. He’s a likeable teenage boy, something of a rarity in the Evangelion universe, and the writers have given serious thought into crafting his friendship with Shinji as it develops. It’s the most human and approachable part of the film.

However, Evangelion 3.33’s place in the franchise will only be assured once we get to see Evangelion 4.44, which hopefully will answer all of the questions posed by this film, and give the story a worthy conclusion. Hence my non-committal wishy-washy grade. Talk about procrastination! Hideaki Anno hasn’t even started making the fourth film yet. He’s busy with a Godzilla movie apparently. Rough estimate, two years for the fourth film, another four years on top for the micromanaged translation and home video release; we’ll be into the next decade before we see the final film. Sheesh!