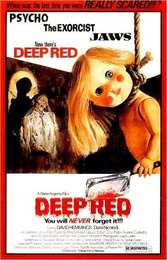 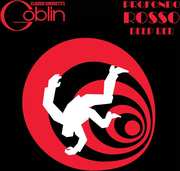 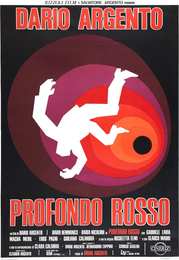 Synopsis:
When was the last time you were really scared? From Dario Argento, maestro of the macabre and the man behind some the greatest excursions in Italian horror (Suspiria, The Bird with the Crystal Plumage), Arrow Video is thrilled to announce the release of his iconic film Deep Red, considered by many as the ultimate giallo movie. Limited to 5,000 copies, this exclusive 3-disc release offers up a stunning new 4k transfer of both the international cut (105 mins) and the director’s cut (127 mins).

This new release will also include a wealth of bonus content, alongside the complete 28-track original soundtrack recording, housed together in deluxe packaging including an all-new exclusive booklet, 6 x postcard set and feature newly commissioned artwork by Gilles Vranckx.

One night, musician Marcus Daly (David Hemmings, Blow Up), looking up from the street below, witnesses the brutal axe murder of a woman in her apartment. Racing to the scene, Marcus just manages to miss the perpetrator… or does he? As he takes on the role of amateur sleuth, Marcus finds himself ensnared in a bizarre web of murder and mystery where nothing is what it seems…

Aided by a throbbing score from regular Argento-collaborators Goblin, Deep Red (aka Profondo Rosso and The Hatchet Murders) is a hallucinatory fever dream of a giallo punctuated by some of the most astonishing set-pieces the sub-genre has to offer.

• Brand new restoration from a 4K scan of the original negative
• Isolated Score in Stereo 2.0
• Audio Commentary with Argento expert Thomas Rostock
• Introduction to the film by Claudio Simonetti of Goblin
• Profondo Giallo – a brand new visual essay by Michael Mackenzie featuring an in-depth appreciation of Deep Red, its themes and its legacy
• Rosso Recollections: Dario Argento’s Deep Genius – the Deep Red director on the creation of a giallo masterpiece
• The Lady in Red: Daria Nicolodi Remembers Profondo Rosso
• Music to Murder For! Claudio Simonetti on Deep Red
• Profondo Rosso: From Celluloid to Shop – a tour of the Profondo Rosso shop in Rome with long time Argento collaborator Luigi Cozzi
• Italian Trailer