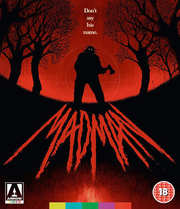 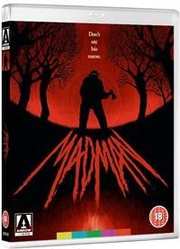 Synopsis:
Gather around the campfire, and hearthe tale of Madman Marz – an ill-tempered farmer who, one dark night, chopped up his wife and two children into pieces. When the locals learned of his heinous crimes, they exacted revenge – sinking an axe into his head and hanging him from a nearby tree. But the next day, Marz’s body was gone…

Thus the camp counsellor finishes his tale, closing with the warning never to say Marz’s name above a whisper, lest the hideously-deformed farmer comes looking for them. Naturally, the first thing that one of the young campers does is calls out Marz’s name – precipitating a terrifying night of murder, mayhem and sexy Jacuzzi vignettes!

Inspired by the same Cropsey urban legend which informed 1981’s The Burning and starring Dawn of the Dead’s Gaylen Ross (appearing under the pseudonym ‘Alexis Dubin’), Madman stands as one of the finest offerings from the golden age of hack ‘n’ slash.

Special Features:
•Brand new 4K transfer from the original camera negative
•High Definition Blu-ray (1080p) and Standard Definition DVD presentations
•Original Mono audio (uncompressed PCM on the Blu-ray)
•Optional English SDH subtitles for the deaf and hard of hearing
•Audio commentary with director Joe Giannone, Madman stars Paul Ehlers and Tony Fish and producer Gary Sales
•Audio Commentary by The Hysteria Continues
•The Legend Still Lives! Thirty Years of Madman – a feature-length retrospective documentary on the slasher classic including interviews with various cast and crew
•Madman: Alive at 35 – Sales, Ehlers and star Tom Candela look back at the making of Madman, 35 years after it was filmed
•The Early Career of Gary Sales – the Madman producer discusses his career in the film industry
•Convention interviews with Sales and Ehlers
•Music Inspired by Madman – a selection of songs inspired by themovie, including the track ‘Escape From Hellview’ from former CKY frontman Deron Miller
•In Memoriam – producer Sales pays tribute to the some of the film’s late cast and crew, including director Giannone and actor Tony Fish
•Original Theatrical Trailer
•TV Spots
•Stills & Artwork Gallery with commentary by Sales
•Reversible sleeve featuring original and newly commissioned artwork by Matthew Griffin
•Collector’s booklet featuring new writing on the film by critic James Oliver, illustrated with original archive stills and posters