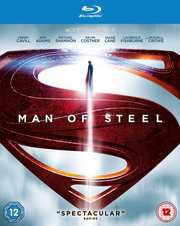 Synopsis:
From Warner Bros. Pictures and Legendary Pictures comes "Man of Steel," starring Henry Cavill ("Immortals," TV's "The Tudors") in the role of Clark Kent/Superman, under the direction of Zack Snyder ("300," "Watchmen").

A young boy learns that he has extraordinary powers and is not of this Earth. As a young man, he journeys to discover where he came from and what he was sent here to do. But the hero in him must emerge if he is to save the world from annihilation and become the symbol of hope for all mankind.

Rounding out the cast are Christopher Meloni ("42") as U.S. military man Colonel Hardy, Harry Lennix ("State of Play") as General Swanwick, Michael Kelly ("The Adjustment Bureau") as Steve Lombard, and Richard Schiff (TV's "The West Wing") as Dr. Emil Hamilton. "Man of Steel" is being produced by Charles Roven, Christopher Nolan, Emma Thomas and Deborah Snyder. The screenplay was written by David S. Goyer from a story by Goyer and Nolan, based upon Superman characters created by Jerry Siegel and Joe Shuster and published by DC Entertainment. Thomas Tull, Lloyd Phillips and Jon Peters are serving as executive producers.