DVD
WWE: Steve Austin:The Most Popular Superstar Of All Time

DVD
Rey Mysterio: The Life of a Masked Man 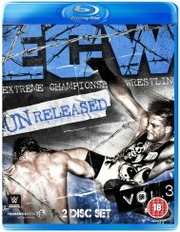 Synopsis:
Join the voice of ECW, Joey Styles and The Blue World Order’s Blue Meanie and Stevie Richards as they go through Extreme Championship Wrestling’s hardcore history to bring you hidden gems that have never before been released on home video!

Unreleased Deleted Scene: I Have a Tommy Dreamer Story