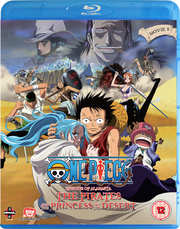 One Piece - The Movie: Episode Of Alabasta (Blu-ray Details)

Review for One Piece - The Movie: Episode Of Alabasta

There was a moment there that I thought that this release had fallen by the wayside. When Manga Entertainment announced the acquisition and release strategy for the first nine One Piece movies, they stated that the sole movie of the nine to have an existing English dub would also get a single disc release on DVD and on Blu-ray alongside the triple pack movie collections. But when the third collection appeared, movies 7-9 on DVD, there was no sign of the movie 8 Blu-ray, let alone the individual DVD release. There was no mention of it either. Fortunately it was just one of those unexpected delays that anime fans have to put up with, as the movie 8 Blu-ray and DVD release shows up now, two months later. I take a look at the Blu-ray disc to find that it’s really just the DVD with a shinier picture.

The Pirates and the Princess of the Desert, after a short recap, catches up to Princess Vivi and the crew of the Going Merry after they have arrived back at her home kingdom of Alabasta, only to find that the rains have stopped, the people are revolting, and the king is being made to look like an unfeeling monster. Someone is fomenting this revolution for his own dark purposes, and time’s running out for Vivi, Luffy and the others to stop it. That someone is Crocodile, and he possesses a devil fruit power that stymies even Luffy. When Vivi and the crew get to the capital of Alubarna, they find that the civil war has already started. 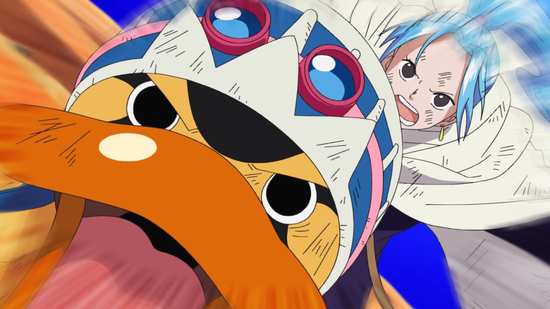 Movie 8 gets released on a BD25, but as it’s only 90 minutes in length, that isn’t a detriment. It looks fantastic, bringing across the animation to bright, crystal clear, and colourful effect. Movie 8 adapts the story anew, rather than reworking the television animation and it tells here, the 1.78:1 widescreen 1080p transfer bringing out the colour, the detail and the depth to the image in a way that the DVD just couldn’t do, especially for the more epic battle sequences. Koza’s army looks a whole lot more menacing here. You do begin to see some of the limits of the animation in HD, with the character designs not really holding up to HD scrutiny at middle distance. But it’s still a step up over the DVD, and for an anime release, not that afflicted by digital banding.

The images in this review are sourced from the PR, and aren’t necessarily representative of the final retail release.

The film gets PCM 2.0 Stereo Japanese with translated English subtitles, or PCM 2.0 Stereo English (there is no signs only track for this disc though). The sound really is disappointing again, following the lacklustre presentation on DVD. Just like the DVD that I reviewed for the movie collection, the music and sound effects overpower dialogue to the point of burying it completely, and that is true for both the Japanese audio and the English. It may be uncompressed, it may be encoded at a full 1.5 Mb per second, but it still sounds awful. You might think that as it’s all subtitled anyway it doesn’t matter, but the imbalance is still distracting. At least we don’t have to put up with the DVD’s painful layer change. 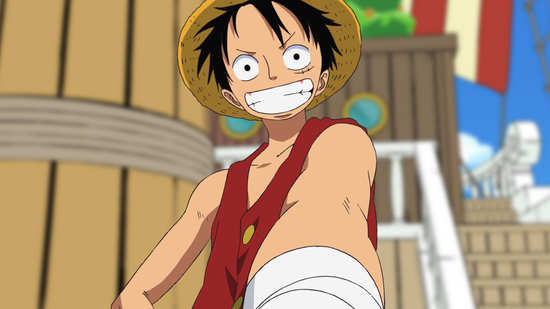 Manga’s subtitling is still weak, with some things left un-translated which really should have been. The devil fruits remain Japanese, while Luffy exclaims ‘GOMU GOMU NO’ before attacking. Manga still can’t do subtitles and screen captions simultaneously, obviously they’ve used the same subtitles as the DVD disc, and when there is more than one conversation going on, it’s hard to understand whose subtitles are flitting by at what point. There are the odd typos in the subtitles, and I might have scratched my head at a couple of translations. It’s all par for the course from Manga Entertainment these days.

The disc presents the film with an animated menu, but it has no extras, not even trailers, although the US release was almost as barebones. One thing to note is that this is the original Japanese version of the film, the credits haven’t been reversioned into English the way that Funimation do. 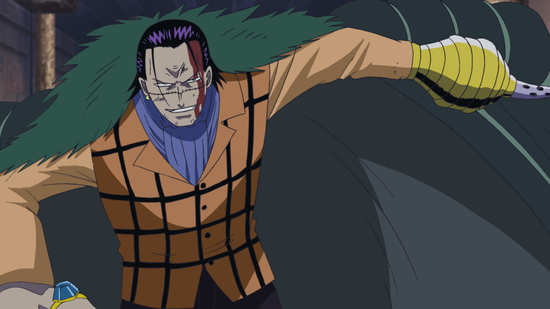 One Piece Movie 8: The Pirates and the Princess of the Desert, according to the menu, or The Desert Princess and the Pirates – Adventures in Alabasta, according to the movie title, or One Piece: Episode of Alabasta: The Pirates and the Princess of the Desert according to the subtitle translation of the English language title on screen. Whatever you might want to call it, this is the eighth One Piece movie, and fans of the TV series have already seen it. This film retells the story of the Alabasta Arc, arguably the best story arc of One Piece, a story that stretched from episode 61 all the way to episode 130. A lot of other things happened on the way, but what’s pertinent is how the crew of the Going Merry encountered the Baroque Works criminal group, and Princess Vivi, who had infiltrated them in order to save her home. You may wonder just how you can fit 70 odd episodes into a two hour movie, and quite frankly you can’t.

This doesn’t work as a standalone movie. The Alabasta arc is the best arc in One Piece, but it takes its time in developing, and there is a whole lot of narrative and plot development to take in. This movie can’t do that, especially at just 90 minutes in length. We get half an hour of hasty preliminaries, leaving out most of the juicy plot, and replacing it with a wodge of exposition setting the story, and a fast forward to Alubarna, before devoting an hour to the climactic action sequence. Worse, the brilliant fights in the series between the Going Merry crew and the members of Baroque Works gets cut down to a highlights package, with the film relying on freeze frame harmonies every few minutes to accentuate the action sequences. It boils down to a load of emotionally weighted scenes without the emotional context. 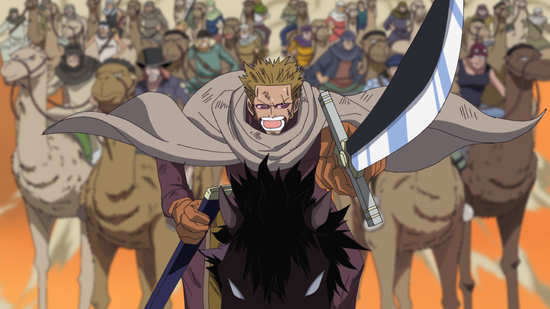 Where the film does impress is the visuals. This is no simple re-edit of the series, cropped for widescreen presentation. They actually re-animated the whole thing from scratch, and you can’t deny the film gains in terms of epic scope. When Koza’s rebel army attacks Alubarna, it looks like something out of the Lord of the Rings... with sand. Also the action sequences are fantastic to watch, Luffy’s fight against Crocodile is awesome, but it’s a shame that the only audio we get here is stereo, as opposed to 5.1 Surround on the other English language releases, as it just doesn’t do the film justice. The Pirates and the Princess of the Desert may not work by itself as a movie, but as a companion piece to the series, it offers a grander interpretation of the highlights of the story.

5.1 Surround. That would have been nice. Actually I would have settled for a decent stereo track, as opposed to the muddy and mostly inaudible mess that we have here. I may not have been alone in hoping that Manga had decided to go back to the drawing board with the individual release of movie 8, and had sourced the Funimation Blu-ray transfer, and reworked the DVD release too. Instead we get a visual upgrade of that lacklustre disc from the collection, and I can only assume that the DVD release of this movie simply repackaged that disc as well. If you actually want to hear what the characters are saying... in HD, then you’ll need a Region A player for that Funimation disc. Best of all, the subtitling will be consistent with the series disc releases. Otherwise the US DVD has 5.1 surround audio as well, locked to Region 1 or Region 4 from Australia if you still want PAL. 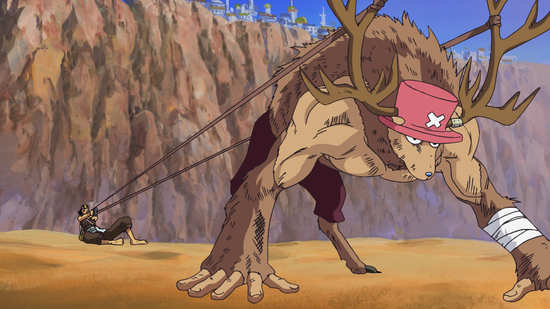 But really, this is one of the weaker One Piece movies, a highlights package of the Alabasta arc which works only to supplement the TV series discs. As a standalone story it just doesn’t work. Just because it’s dubbed shouldn’t be the reason a film gets a Blu-ray release. I would much rather have seen movie 6, directed by Mamoru Hosoda get a Blu-ray, although on the strength of this disc, not from Manga.