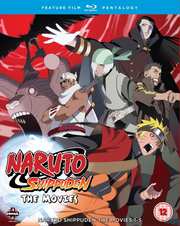 Naruto Shippuden: The Movie is a non-stop action-packed introduction to the brand new series of adventures of ninja-in-training, Naruto Uzumaki. A sinister ninja is using black magic to raise the spirit of the long-imprisoned demon Moryo. If Moryo's body is also resurrected, he will establish a Thousand Year Kingdom that will mean the end of life on Earth as humans know it. Only Shion, the priestess of the Land of Ogres, can stop Moryo by keeping his body sealed within a hidden temple. Naruto leads a special squad including Sakura and Rock Lee to protect Shion on her journey.

Invasion of the Sky Ninja
A group of mysterious flying ninja have arrived from overseas to launch a sudden attack against the Hidden Leaf Village, leaving behind a wake of destruction. The group is revealed to be the "Sky Ninja" from the Land of Sky, a nation thought to have been destroyed by the Hidden Leaf Village long ago. To save their village, Naruto and his friends set out to stop this new threat. During the course of the mission, Naruto crosses paths with Sasuke, his friend who has parted ways from the Leaf Village.

Naruto Shippuden Movie 3: The Will of Fire

Has Kakashi betrayed the Leaf Village?! Four ninjas with bloodline limits who have been guarding the Hidden Villages of Cloud, Stone, Mist and Sand disappear from their respective villages. The Land of Fire comes under suspicion as it is the only country to have suffered no loss. Mounting suspicion among the four countries almost brings about a 4th Great Ninja War. In the Hidden Village of Leaf, Tsunade orders her men to keep strict guard against War and to try to find out what really happened. At the same time, it turns out that Kakashi has left the village. The bad news deeply disturbs Naruto and his friends.

The Rogue Ninja Mukade is about to be caught by Naruto's team when he summons forth the power of the Ley Line - an ancient underground channel of chakra. Naruto gets caught up in the chakra and is sent back in time to the city of Loran, known for its thousand towers. There he encounters the future Fourth Hokage, Minato Namikaze, on a top-secret mission and the Queen of Loran, Sara, whose rule is threatened by Mukade. Will Naruto be able to return to his own time, and can a chance encounter in the past save the future?

Naruto is convicted of a serious crime he didn't commit and is sent to the inescapable prison, Hozuki Castle. The warden, Mui, quickly seals away Naruto's chakra to prevent him from rebelling. Refusing to give up, Naruto plans his escape while also befriending his fellow inmates Ryuzetsu and Maroi. But he can't help but wonder what their ulterior motives are…