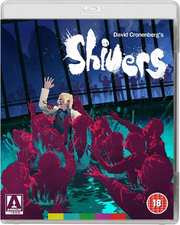 Synopsis:
Initially reviled in its native land (some critics took exception to the fact the film was largely funded by the Canadian taxpayer), Shivers is an intensely claustrophobic, subversive masterpiece and an essential entry in the oeuvre of one of the horror genre’s most gifted auteurs. Some 40 years after its release, it still retains its power to shock.

-On Screen! – An episode of the Canadian television programme which documents the release history of Shivers, featuring interviews with Cronenberg, co-producer Don Carmody, as well as other cast and crew

-From Stereo to Video – A specially-commissioned video essay by Caelum Vatnsdal, author of They Came from Within: A History of Canadian Horror Cinema, charting Cronenberg’s career from his experimental beginnings through to Videodrome, his first major studio picture

-Collector’s Booklet featuring new writing on the film by Paul Corupe, creator of the Canuxploitation website, reprinted excerpts of Cronenberg on Cronenberg and more, illustrated with original archive stills and posters