Blu-ray
That Obscure Object Of Desire 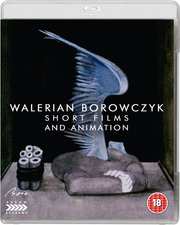 Synopsis:
For the first decade of his career, Walerian Borowczyk exclusively made short films, initially in his native Poland, but then mostly in France, where he settled permanently in the late 1950s. This disc includes the vast majority of the shorts that he made between 1959 and 1984, apart from ones that were originally intended to accompany specific features.

Far from being prentice work or optional extras, the shorts include many of his greatest films, such as the cut-out Astronauts, the reverse-motion Renaissance and the extraordinary Angels’ Games, a one-off masterpiece of the macabre that would alone establish Borowczyk as one of the cinema’s most innovative artists.

In 1967, Borowczyk made his feature debut, a grotesque and surreal fantasy about the physically and temperamentally mismatched couple Mr & Mrs Kabal. Made with a tiny production team at a time when animated feature films were far scarcer than they are now, it’s almost the polar opposite of a Disney film, with angular, mainly monochrome graphics bringing the Kabals’ universe to startlingly vivid life. Both this and all the short films are presented in brand new high-definition restorations from original 35mm elements.