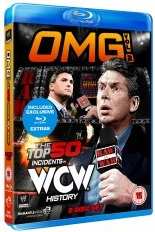 Review for OMG! VOLUME 2 - THE TOP 50 INCIDENTS IN WCW HISTORY

When WWE released their OMG set a while back it seemed to understand that when we say OMG it is because we are shocked or amazed by what we just saw. This is Foley coming off the cell, Austin and the beer bath, Jeff swanton off the ladder. These are moments that you told people about and had to show them. I think when creating this one specific for WCW they missed that memo and early on Dusty Rhodes sums up this set perfectly 'It's like Oh My God what did we do this for?'

The set is split into a Top 50 Countdown and then a second disk filled with full matches or moments referenced throughout. To be honest, this set could almost be a 'Top 50 Dumbest Things WCW Did' and really if you took away maybe a dozen of them then that's exactly what you would have had. I watched this countdown and literally every thing I saw was something which we would dub as 'wrestlecrap' with a lot of it also why WCW went out of business in 2001.

They decide to include Warrior's WCW run, Chucky challenging Rick Steiner, Vince Russo resetting WCW, Goldberg turning Heel, Vince Russo shooting on Hogan, Judy Bagwell on a Pole match, Sycho Sid's promos, Chamber of Horrors match, the awful WCW trilogy of movie vignettes that are so painful to watch, Robocop helpng Sting, Vince Russo winning the WCW World Title, Fingerpoke of Doom which according to Schiavone is 'what world championship wrestling is all about'??

However, it is not all bad. There are some great moments though such as The Four Horsemen breaking Dusty Rhodes leg, Jericho's feud with Goldberg (which WCW were too stupid to make it an actual feud), Lex Luger's surprise debut on the debut Nitro, Bret Hart and the steel plate, Eddie Guerrero vs. Rey Mysterio from Halloween Havoc (not so much an OMG moment, but certainly an amazing match), Jericho and Dean Malenko's feud ending with the amazing battle royale swerve.

They of course had to include the infamous moment Madusa dumped the WWF Women's title on Nitro, Ron Simmons becoming the first African-American WCW Champion, Sting becoming the 'Crow' gimmick against the nWo, Terry Funk going hardcore on Ric Flair, Rick Rude being on both Nitro and Raw on the same night, Starrcade Scaffold Match between Roadwarriors and The Midnight Express, Goldberg winning the Title from Hogan, Steel Cage I Quit match Tully Blanchard vs. Magnum TA and the last Nitro

There's a lot of early nWo stuff, Scott Hall debut 'You wanna start a war?', powerbombing Eric Bischoff, DDP betraying them, backstage brawl with Rey Mysterio being thrown 'like a lawn dart' by Kevin Nash and of course Hogan joining the Outsiders and creating the nWo.

The set also includes the Starrcade Scaffold Match between Roadwarriors and The Midnight Express which is a great match and nt just because it is the Roadwarriors, although that does help. Cactus Jack against Vader is a brutal match and one that shows just how vicious Vader was and how resilient Mick Foley was to take the punishment.

The full Bash at the Beach match is included with the full nWo speech.
Also includes Scott Hall's debut and Kevin Nash powerbombing Bischoff, Sting taking out the nWo, Goldberg spearing Bret Hart, Goldberg vs Hogan for the WCW Championship is an amazing match and though I feel that this should have been a No 1 Contenders match and then at least get a PPV payoff I do feel the match and the impact is phenomenal.

When it comes to the extras again I'm confused. Did whoever pick out the extra matches not realise that when they are mocking things like Robocop or The King of the Road match between Dustin Rhodes and The Blacktop Bully that this means we don't want to watch it again?? It seems someone did not get that memo and included all the horrors from the Top 50. WCW Championship match between Hogan and Giant really should have been left off as it isn't a great match by either as is their Sumo Monster Truck Match which really didn't need to be seen again. And why would you include the Chamber of Horrors match when it is generally regarded as one of the worst matches of all time?? They also include the tasteless Parody of the Four Horsemen, Chucky promo and Russo hitting the 'Reset Button'??

If I'm honest there is probably more on the second disk that I would never watch than what I would/ Why would you include the awful Sting/Vampiro Human Torch Match or anything Vince Russo booked for that matter? I'm surprised they didn't include the David Arquette match too!!

This is possibly one of the strangest wrestling sets I have ever sat through. Unlike other nostalgia sets this is one that I would not want to rewatch or relive. If this had been a 'worst of wrestling' sets then I would have understood it, but the fact that in the middle of all the awful stuff booked by Russo and all the other horrible things WCW did there are a few shining moments makes the whole thing thing feel a little disjointed. If you are a fan of WCW or bad wrestling then you may enjoy this, if you want to just relive the 'best' then you may want to pick up one of the other recent WCW related sets. As all I can think is OMG who thought this was a good idea?