Blu-ray
Witness for the Prosecution 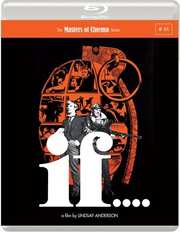 Synopsis:
Legendary director Lindsay Anderson expanded on the social outrage and intense character focus of his debut This Sporting Life with this combustible tale of teenage insurrection. Winner of the 1969 Palme d'Or at Cannes, If.... was a popular triumph and instantly recognised as a classic.

A caustic portrait of a traditional boys' boarding school, where social hierarchy reigns supreme and power remains in the hands of distanced and ineffectual teachers

and callously vicious prefects. But three junior pupils, led by Mick Travis (played by Malcolm McDowell in the role that would catapult him to becoming one of Britain's most iconic actors), decide on a shocking course of action to redress the balance of privilege once and for all.

Packed to bursting with its director's customary passion and experimentation, If.... remains one of cinema's quintessential tales of rebellion, a radical snapshot of late 60s' change, and one of the towering achievements of British film in any era. The Masters of Cinema Series is proud to present this masterpiece in a new Blu-ray edition.