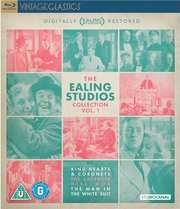 Synopsis:
Ealing's greatest comedies captured the essence of post-war Britain, both in their evocation of a land once blighted by war but now rising doggedly and optimistically again from the ashes, and in their mordant yet graceful humour. They portray a country with an antiquated class system whose crumbling conventions are being undermined by a new spirit of individual opportunism. In the delightfully wicked Kind Hearts and Coronets, a serial killer politely murders his way into the peerage; in The Lavender Hill Mob a put-upon bank clerk schemes to rob his employers and The Man in the White Suit is a harshly satirical depiction of idealism crushed by the status quo.

A superb box set of some of Sir Alec Guinness’s best work, and together for the first time on Blu-Ray, these are three of the finest Ealing comedies. A perfect introduction for newcomers to the Ealing Classics collection, this trilogy is also a must-have for all British comedy, Ealing film and Alec Guinness fans.

KIND HEARTS AND CORONETS (1949)
Alec Guinness features in eight different roles as the unsuspecting members of the aristocratic D’Ascoyne family--murdered one by one by the scheming, outcast cousin Louis Mazzini (Dennis Price). Mazzini's mother was a D'Ascoyne by birth, but when she ran away with an opera singer she was ostracized by her family as a result. When her dying wish to be buried in the family crypt is refused, Louis vows to get his revenge. As he ascends the social ranks, he is torn between his love for now-married childhood sweetheart, and equally devilish Sibella (Joan Greenwood), and the saintly wife of one of his victims, Edith D’Ascoyne (Valerie Hobson).

THE LAVENDER HILL MOB (1951)
Holland (Alec Guinness) is a shy retiring man who works as a bank transfer agent for the delivery of gold bullion. One day he befriends Pendlebury (Stanley Holloway), a maker of souvenirs. Holland remarks that, with Pendlebury’s smelting equipment, one could forge the gold into harmless-looking toy Eiffel Towers and smuggle the gold into France. Soon after, they gain the services of professional criminals Lackery (Sid James) and Shorty (Alfie Bass) and the four plot what they believe will be the perfect crime - but which turns out to be anything but.

An enduring classic from director Charles Crichton, THE LAVENDER HILL MOB features an early screen appearance from Audrey Hepburn and was included on the British Film Institute’s list of the 100 Best British Films of the 20th Century.

THE MAN IN THE WHITE SUIT (1951)
Sidney Stratton (Alec Guinness), a humble inventor, develops a fabric which never gets dirty or wears out. This would seem to be a boon for mankind, but the established garment manufacturers don't see it that way; they try to suppress it. Nevertheless, Sidney is determined to put his invention on the market, forcing the clothing factory bigwigs to resort to more desperate measures.