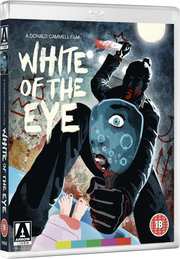 White of the Eye (Blu-ray Details)

Review for White of the Eye

White of the Eye

Director: Donald Cammell
"You can't hide anything in this house, can you?” 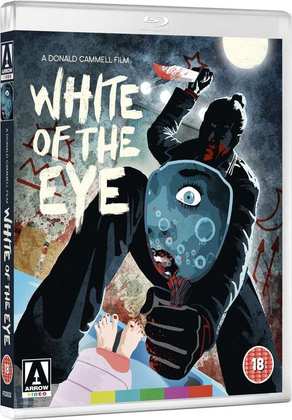 Despite being an industry veteran of 30 years, by the time Donald Cammell committed suicide on 24 April 1996, he had only directed four feature films.

A maverick who resolutely refused to compromise with the many demands of his chosen profession, Cammell's filmmaking output was severely limited by his own stubbornness, his own ambition, and his own vision.

Cammell made his directorial debut in 1970, alongside Nicholas Roeg with whom he co-directed Performance. Starring Mick Jagger, this startling gangland drama was something of a cult sensation. But it would take some time; squeamish reviewers balked at the homosexual elements and graphic sex, ignoring the themes and questions raised in the film. Gradually, it became reevaluated and would gain a tremendous reputation, in addition to being hugely influential as the decade passed.

During the rest of the Seventies, Roeg would go on helm horror masterpiece, Don't Look Now, classic outback adventure Walkabout, and the divisive David Bowie feature, The Man Who Fell to Earth. Sadly, Cammell, was unable to become even that prolific. He finally directed another film in 1977. Demon Seed was an adaption of the Dean Koontz novel, and starred Julie Christie. Despite such pedigree though, the film was released to a mixed response, and more upsettingly for Cammell, the final cut was eventually taken out of his hands. Following the experience, he refused to accept offers to direct the work of others. Instead, he spent an extraordinary period of time preparing his own scripts and projects, none of which would come to fruition.

Spending the next decade away from the big screen, Cammell return in 1987 with White of the Eye, a film certainly too eccentric for many tastes, before completing his final film, Wild Side, in 1995. The latter would prove to be the final insult for him, with yet another film taken out of his hands, he slumped into reclusiveness, and eventually committed suicide.

Paul White (David Keith) is a sound expert, who spends his time fitting indulgent, expensive sound systems in the homes of wealthy folk in the Arizona region. In that location, a series of women have been murdered, and Paul's wife, Joan (Cathy Moriarty), begins to suspect her husband. As the film unfolds however, it becomes clear that this is not a run-of-the-mill serial killer thriller. White of the Eye is a mis-mash of influences, Arizona's arid setting, Apache culture, and decadent middle-class American life-styles. Told via a mixture of the present and flashbacks charting Joan and Paul's relationship, Cammell's picture is a truly oddball pseudo-Giallo.

White of the Eye is a really strange experience. Billed as something of a horror film, it never approaches anything resembling frightening, yet is at times, very, very unsettling. It takes the form of a higher class slasher for much of the duration, slowly building a degree of suspense that one expects to explode in the final moments.

The film takes an odd, and somewhat brave turn in the final three-quarters-of-an-hour however. It leads to a concluding thirty minutes that is somewhat ill-matched to what has come before. But such courageous aversion to the norm is what typifies the piece as a whole. It really is a unique amalgamation of wild ideas and unusual vibes, becoming an almost surreal dreamscape. The slasher aspect is something of a red herring; Cammell's interest seems to lie more with themes such as self-destruction and a raw dissolution of a marriage. In that respect, it must be regarded as both a success and one of the most fascinating experiments of the 1980's. 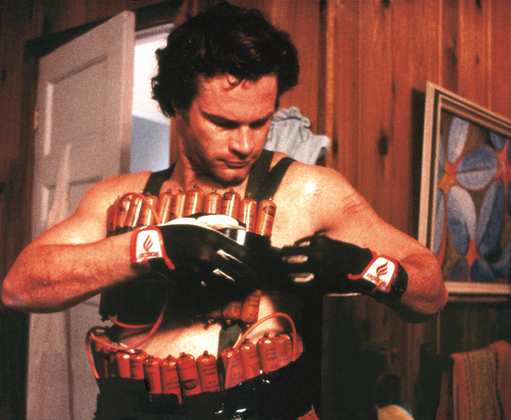 Of course, it isn't all smooth sailing. At one point, a victim is rendered unconscious by a Piledriver-like maneuver. It's hard not to giggle at such an unlikely, and for all intents, silly looking collision. There's also stunt towards the end that looks just as daft as the earlier WWE-style incident, while an explosive finale feels out of place, similarly to the never-resolved Twin Peaks bomb that literally lit up one of the famous shows' lesser story arcs. Here such devices seem to conflict with Cammell's dreamlike direction, and the lush photography. To the director's credit though, at no point does he settle for less than any opportunity to throw the viewer out of their comfort zone. Ever technique and trick he can muster up is included.

Flashbacks range from the delirious to the hilarious, occasionally proving to be extremely disturbing. At best, such as with a sequence that depicts Mike positioning a gun to Paul's head, they're triggered in genuinely imaginative, innovative ways. As Joan's daughter approaches to awaken her, she lifts her eye-lid, while the camera cuts to a typical close-up of the eye-ball, seguing into the past. It's a superb moment.

The picture quality was always going to be a little uneven with this release, given the bleaching processes used to enhance the grain in certain sequences. It should be noted that such effects are intentional. The photography does play to his strengths too, most notable, his enthusiasm for he the desert, with some staggering scenes, and sweeping, elegant shots. Dust feels as if it could literally come off the screen in this excellent restoration.

The music is frequently as bizarre as the visuals. Co-written by Pink Floyd's Nick Mason and 10cc member, Rick Fenn, it's both eclectic and surprising.A heady dose of Hank Williams Jr's "A Country Boy will survive" is an uneasy accompaniment to Tangerine Dream-esque sound-scapes. Somehow, it works within this context and that's difficult to imagine if not for Cammell's unique vision.
Performances are also very impressive indeed. Cathy Moriarty brings the underrated down-to-earth qualities that she exuded in Raging Bull. Her feisty performance prevents the character from slipping into unsympathetic damsel-in-distress territory and really helps ground proceedings when needs be. 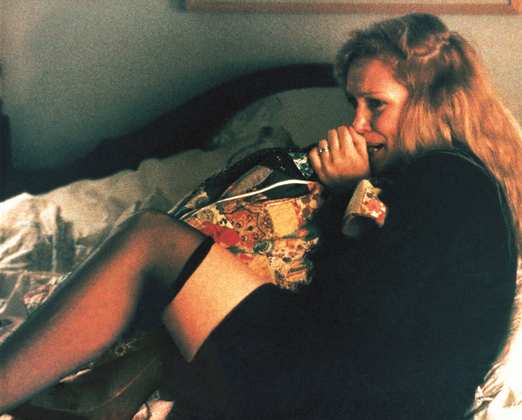 David Keith is suitably off-kilter in his role too. He conveys a conviction in his own actions that sets him apart from your average psychopath. You genuinely believe his dual personality .
Flashbacks to his initial meetings with Joan however, highlight the sometimes bizarrely uneven tone, His pseudo- Native American attire and Patrick Swayze mullet provoke only laughter. It's a rare blip however- for the most part, this film is a real treat.

The true appeal of White of the Eye though, is Donald Cammell himself. His idiosyncrasies, his creativity and his flaws are stamped all over it.

The biggest of the features and best, is The Ultimate Performance. A feature length documentary, originally screened on the BBC in 1998. This remarkable film came shortly after Cammell's death, and includes interview footage with him, in addition to family members. Great for horror fans seeing contributions from the like of Barbara Steele too. Contributions from British actor Stanley Meadows, and Cathy Moriarty are insightful, but the real meat here comes from China Kong, his widow and co-writer. This portrait really paints Cammell as a genuinely unique, violate artist, and as he directed only four features, there's tons of room for exploring his friendships and relationships here. Of his output, Performance in particular, is covered in much more detail than his subsequent efforts.
A tremendous 70+ minute piece on the British trailblazer, at times this is pretty devastating stuff, and hugely revealing.

Also included;
-The Argument; Short film by Cammell (11 minutes)
-Into the White; a short interview with director of photography, Larry McConkey.
Some really interesting observations about Cammell's personality, especially coming from someone who didn't know the director prior to working with him.
-Deleted Scenes; these include commentary by Sam Umland, Cammell's biographer, in lieu of the now lost audio.
The most interesting of these is a scene that shows Joan shopping, and encountering a lady on her husband's radar, Ann Mason. Umland does a great job of filling in the gaps throughout these moments.
-Bleach Bypass scenes; This feature shows us the flashback sequences that were intentionally bleached as they were originally shot, totally eleven minutes of material.
-Alternate credits
-Sam Umland audio commentary; lots, and lots of great insight here, with a tremendous amount of technical detail that is impossible to take in all at once. There's also some brilliant discussion about the title of the film, and generally a great deal of absorbing philosophizing.
Umland could do with another voice to bounce off here however.

-Arrow have also included a gorgeous booklet, which contains new writing on the film, and some beautiful stills. This is a real highlight- something that has become a regular thing with their releases. 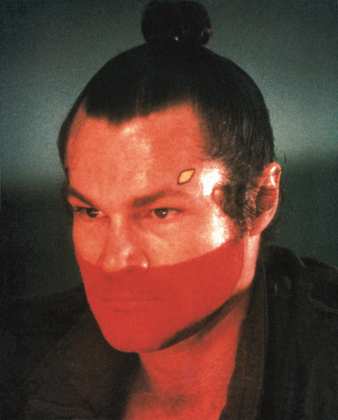 A staggering soundtrack, very arresting visuals, and a pair of terrific lead performances help elevate what could have been a run-of-the-mill thriller.
The key strengths that lie within White of the Eye both define it as the genuinely unique piece that it is, and provide the obstacles that will leave alienate most viewers. Cammell's film is just too offbeat, too committed to its own sense of self and at times, too brilliant. It's a Donald Cammell picture, essentially, and it needs to be taken as such. It does not wholly satisfy but it does stimulate and provoke. A brilliant acquisition for Arrow, they should be applauded for their excellent handling of this curiosity.

A deeply flawed, but fascinating marriage of Eighties excess, and Giallo swagger, White of the Eye is not to be missed.