Blu-ray
X-Men: Days of Future Past 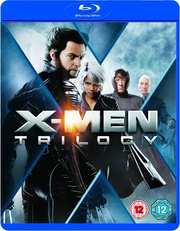 Synopsis:
X-Men
Born into a world filled with prejudice are children who possess extraordinary and dangerous powers--the result of unique genetic mutations. Cyclops (James Marsden) unleashes bolts of energy from his eyes. Storm (Halle Berry) can manipulate the weather at will. Rogue (Anna Paquin) absorbs the life force of anyone she touches. But under the tutelage of Professor Xavier (Patrick Stewart), these and other outcasts learn to harness their powers for the good of mankind. Now they must protect those who fear them as the nefarious Magneto (Ian McKellen), who believes humans and mutants can never co-exist, unveils his sinister plan for the future.

X-Men 2
When new teleporting mutant Nightcrawler (Alan Cumming, Goldeneye) appears inside The White House and attempts to assassinate the President, the X-Mens’ world is thrown into danger. Rebel baddie Stryker (Brian Cox, Manhunter) is behind it and plots an elaborate plan to capture all mutants including the pupils at Professor Xavier’s School for the ‘Gifted’. It is then up to the indestructible Wolverine (Hugh Jackman, Swordfish) to discover the truth about what is going on, and in the process, the story behind his own identity. Meanwhile, the villainous Magneto breaks free from prison with the help of his shape-shifting comrade, Mystique (Rebecca Romjin-Stamos, Femme Fatale), creating more cataclysmic events for the X-Men. As danger beckons, the mutants call upon their powers to an even greater extent.

X-Men: The Last Stand
Worthington Laboratories--using a powerful mutant boy--develops a serum that eliminates the 'mutant X gene' permanently. This so-called 'cure' quickly divides the mutant community; Professor Xavier and his school are willing to give the government the benefit of the doubt but Magneto and his mutant Brotherhood see the serum as a vile threat to their way of life. They form an army of mutants and march on the fortified Worthington Laboratory located on Alcatraz Island. A much more dire threat appears in the form of the resurrected super-mutant Jean Grey, who has succumbed to her cataclysmic identity known as The Phoenix.