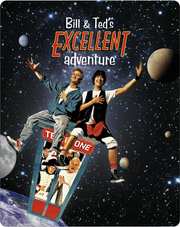 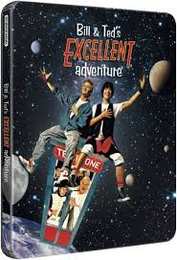 Bill and Ted's Excellent Adveture is a comedy science fiction film in which two high school students Bill (Alex Winters) and Ted (Keanu Reeves) must pass their History class or Ted will be shipped off to Alaska. If this happens their band Wyld Stallions may never be. This has an even worse implication as in the future their music is the cure for all of the world's problems and so Rufus (George Carlin) is sent back in time to help them pass their class.

This leads Bill and Ted to go on a most excellent adventure in a time travelling phone booth picking up historical figures to speak in their presentation. These include Billy The id, Joan of Arc (You know, Noah's wife), Napoleon, Genghis Khan and Abraham Lincoln amongst others. Will it be enough and will they be able to do all this in time... Of course dudes, they have a time machine!

I really thought this film would suffer from being set in a certain time or that nostalgia for this kind of stupidity would only work when I was in my early teens. Nope. This film is as fun as it was back then. It is true that this is definitely an 80s movie, that doesn't effect it at all and hearing Bill and Ted say Bogus, Heinous, Most non-righteous and of course Excellent was... well Excellent!

The performances by Winters and Reeves are perfect and though you are never quite sure if they really are that stupid it does make for some fun characters to follow. The rest of the cast, particularly those playing the historical figures are great and though if you apply any kind of logic (WARNING: DO NOT DO THIS!!!) to this film you could pick a million holes into why this would not work. My advice, as above, DO NOT DO THIS! This is a film about two teenagers who time travel in a phone booth, don't apply logic or your head will hurt.

The script is funny, the effects do not look as dated as I thought they would and the music throughout is perfect. I would say this is almost the perfect 'Switch off your brain' film and if you enjoy this I would hope that the sequel will also get a Blu-ray release soon, but if not, seek out Bill and Ted's Bogus Journey which is worth it for the scenes with Death alone.

The Blu-ray is jampacked with extras and my only issue with them is that I do feel that instead I would have preferred to have had Bogus Journey on here too. However, the extras are all pretty excellent.

The Original Bill and Ted is a conversation between writers Chris Matheson and Ed Solomon. This is a fun little extra and shows just how they came up with the story and how they wrote the script. It is a shame that they couldn't have also contributed a commentary to the film as it felt as though they had more stories to tell and twenty minutes is not enough time. From Scribble to Script is a strange look at the early scribbles of the script, but without the context or someone explaining what you are looking it's a bit like finding a copy of the original draft of Citizen Kane, but not knowing what that is. If Matheson and Solomon had provided a commentary over this it would have worked better.

Air Guitar Tutorial is an amusing, if insane featurette concerning the world air guitar champions. Though the Excellent Air Guitar was a common catchphrase in Bill and Ted it's never taken to this degree and this may just for those interested. However, Score is a great interview with guitar legend Steve Vai talking about Air Guitar playing and work in films, though seeing as he actually worked on the sequel it would probably have made more sense for this to be on that.

The Linguistic Stylings of Bill and Ted looks at the catchphrases Bill and Ted used or created and some of the many mistakes that they made over the course of the film, such as Napoleon being a short, dead dude and Caesar being the salad dressing dude. This is a nice little feature, though I thought it would be more a look at how much of an impact they had on the lexicon of the world. Hysterical Personages is a strange feature which describes a number of historical figures (most who appeared in this film or its sequel). What is strange is that instead of trying to be funny with the facts, the description is more or less accurate with just very strange often ludicrous pictures of the people to accompany the voiceover.

Radiospots are simply the trailers and promos from the radio, which is nice, but then you realise that there are no trailers or TV spots, which is odd. A stills gallery is nice, but nothing special. However, also included is the first episode of the Bill and Ted cartoon which isn't as great as I remembered it, but still nice to see and surprising to learn that almost the whole cast (Alex Winters, Keanu Reeves and George Carlin) came back for the show.