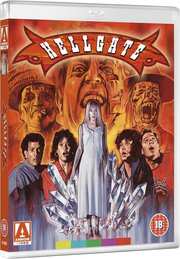 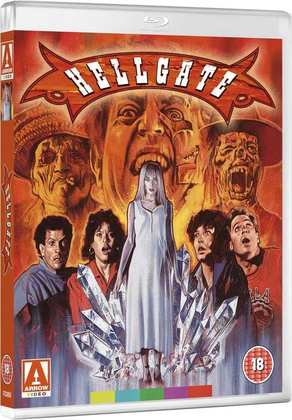 My own personal memory of New World's 1989 release Hellgate, extends back to seeing the awesome cover artwork in a local second hand video shop. The eye-catching sleeve promised so much. A shapely outline of a vixen, shrouded in an alluring blue glow, accompanied by the tag-line "From the Special Effects masters that brought you Hellraiser and Hellbound". Even the font looked impressive, edgy and serious minded. This was a horror film for purists, I thought. Heck, the second piece of artwork I recall seeing depicted a kind of zombie with a melting face, his image cast upon a moody graveyard silhouette. Strewn across the reverse were the words "Beyond darkness, terror lives forever!". This was sure to scare the pants off a pimply, shy horror geek like me.

Then I saw the film. Like many an Eighties effort, more time and effort appeared to go into the sordid sleeve design than the movie itself.

Hellgate is everything but frightening.

Directed by William A. Levy, Hellgate instead of being a supernatural epic as one may have supposed, is a shlocky, low-budget hodgepodge influences and bizarre ideas. Levy came in with with about 15 years' experience as a director, having debuted on the notoriously tacky Blaxploitation effort, Blackenstein. This one was the third team-up between he and star, Ron Palillo. Perhaps this is partly explained on the extra features within this set, during which the director reveals that his intention was to cast good American accents, rather than good actors. He certainly succeeded in that regard. Such an approach presents Hellgate in a nutshell- cinematic muck dredged up with the best of intentions from a kernel of a good idea. 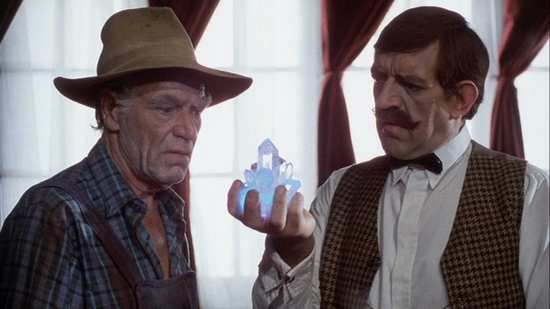 Hellgate is a bonkers effort, there's no way around it.

The film concerns three of the oldest looking students you'll see outside of Slaughter High, sitting by a fire telling tales of a town called "Hellgate". They recall the story of Josie, an innocent young thing who gets kidnapped She's taken back to the town, stripped of he skirt (nobody attempts to prevent this, disturbingly) where her father attempts to save her from the captors. Sadly, despite killing the ring leader, he inadvertently buries her under a pile of rubble in the process. Fortunately for him though, a rock is eventually discovered in the nearby mine, which zaps dead creatures, reanimating them in the process. Obviously, this ends up in the hands of the young girls' dad, and guess who he chooses to dig up for revenge over predatory young men?
Meanwhile, fourth member of the weird prototypical Scream group, Matt, is en route to join our present day trio. Lost along the way, he encounters Josie, who is seductively sauntering around roadside during the night, showing off her best assets. Josie brings Matt back to her luxurious accommodation, proceeding to attempt her seduction, before her father spooks our hapless hero. Matt eventually finds his way to his middle-aged bum chums, as their collective IQ's manage to assert the legends may be true, before investigating further whilst their situation gets even worse... 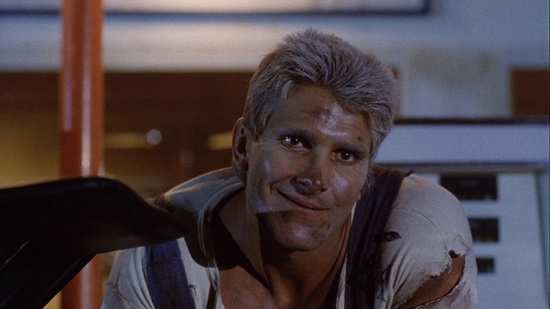 Performances are uniformly abominable throughout this. Cack-handed and unintentionally comical, Ron Palillo makes for a truly bizarre lead. Unheroic and oddly sleazy, his scenes wherein women lustfully throw themselves at him are really unbelievable.

The tone is all over the place too. Despite the spookiness involved, and Matt's insistence that there is a girl in trouble, there's still time for terrible puns and comedy bumbling. Why not take a short-cut through a graveyard, eh? The diner which acts as a middle round between reality and the wonky realm of Hellgate feels like a family friendly establishment one might find on Mars in Total Recall. At no point is a consistency of mood established, and at times locations do genuinely feel as if they aren't of this earth.

The special effects also suck, with the reanimation effects particularly drawing laughs. A toy bat is a particular highlight, while the laser beams shot forth during the process certainly recall the one cringe-worthy moment in Hellraiser due to their ineptitude.
When one character is decapitated, the prop head doesn't even begin to resemble the head previously attached to their body. It hardly matter however, as the headless corpse runs off in hilarious fashion, all attention is diverted from the substandard grue.

Indeed, many of these sequences seem to be set-up in a manner that is meant to showcase the effects, as if they are something to be proud of. Bar one or two exceptions though, they're really poor indeed. But the naivety in exposing their ineptitude is part of this movie's charm. That's also the secret behind Hellgate... It is charmingly bad. So much is thrown at the screen here, it's impossible to not be enthralled. For kids of my generation,on one hand the promise of a genuine horror film for the ages was taken away, but the other hand... Gave us the startling madness of Hellgate.

This is the sort of release that absolutely has to contain bonus material to really make it a worthwhile purchase, even if the subject at hand wouldn't traditionally merit such attention. In this instance, Arrow and High Rising Productions have again come together to deliver the juicy goods. Limited to just 1,000 copies, Hellgate is available as a Dual Format DVD/Blu-Ray combo release.

-Road to Perdition, B-Movie Style
This is a meaty 35 minute retrospective of the movie, with director William A. Levy. He's another in Arrow's long line of brilliant unearthed contributors, Well-spoken, he's extremely open in recounting his experience in the business. Turns out, there's a wealth of complications to be discussed when it comes to Hellgate's turbulent production.

-Howard S. Berger Reflects on Hellgate
"Hellgate is one of those movies that you should see between the ages of 6 and 12."
Howard Berger could not be more right. The scholar draws comparisons with Lucio Fulci's dream-like random structuring, and it's a really apt point. Taking Hellgate as a pseudo-Fulci rip-off is a great starting point. The pace is all over the place, the set pieces lumber into view seemingly at random, and the violence appears consistently, if sometimes ineffectively.
This extra only runs 12 minutes, but he's really good value, and perfectly summarizes why the movie endures. He doesn't kid himself however; he describes Levy's film as an "oddity", though I'm sure the BBFC would disagree with his assertion that you should be getting your 6-7 year old hooked on the film!

-Video Nasty
8 minutes of Kenneth J Hall (Puppet Master creator) discussing the low-budget horror scene of the time. He dips into topics such as nudity, and the gloriously misleading cover art of the Eighties. As usual, he's really brilliant, and one only wishes there could have been more from him here!

-This limited edition release also includes a beautifully put together booklet, complete with writing on the film by Fangoria contributor, Lee Gambin.

This is an excellent, appropriate treatment for a film that would likely have just been dumped onto the market bare-bones by most distributors. Arguably, it isn't quite as meaty as some of their other packages, but quality over quantity stands true here this and the set cannot earn less than a strong thumbs up. 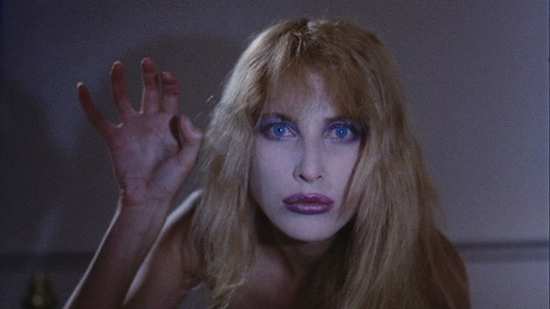 Hellgate is the very definition of trash. Needlessly bare boobs, lashings of inept gore, and all logic tossed aside, it's the sort of gem that the Eighties often spurted forth. Suffering an identity crisis and a script that hints at an actual story, but instead delivers a random assortment of scenarios that don't really flow together, it's something of a head-scratcher to sum up. What makes it a continually surprising viewing experience though, is how it attempts to cover all bases. Between Succubus', Zombies, Ghosts, Reincarnated animals, Madmen, chorus girls, and once more, yes... boobs, there's enough of everything to prevent the film from ever becoming boring.

It's terrible in many ways, but spectacularly memorable, and it shouldn't be... but Hellgate  is glorious fun.