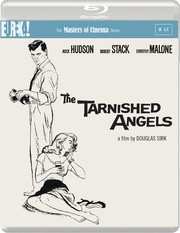 Review for The Tarnished Angels

“ I need this plane.. Like... an alcoholic needs his drink,” 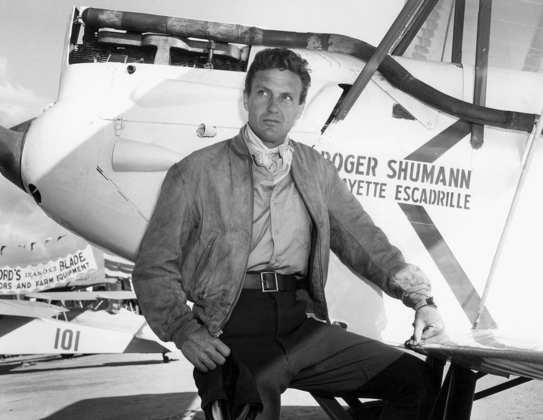 Currently enjoying a resurgence in critical appreciation, Douglas Sirk was a German/Dane born in Hamburg, yet brought up in Denmark. Starting out as a thespian, Sirk moved the US in the late 1930's where he began his career in earnest, becoming an incredible prolific, successful director between 1943 and 1959, often working with Rock Hudson, and enjoying great commercial success, if not critical acclaim, at least not initially.
Sirk became well known for his sweeping melodramas and eye for colour. Roger Ebert credited his best known work, Written on the Wind, as being pre-preemptive of the knowing, sly streak of humour behind the soap operatics of shows such as Dallas.

Sirk's legacy though, is most likely to be as an inspiration to other filmmakers and artists, and The Tarnished Angels is considered one of his overlooked masterworks

Roger Shumann and wife LaVerne, are Depression-era carnival folk. Shumann is a former World War 1 pilot turned showman at low-rent airshows, while his other half is employed in the risky role of stunt parachutist. Burke Devlin is a newspaper man with a salty reputation, who becomes absorbed into their world, and in particular, LaVerne. Their lives begin to unravel following a crash by Shumann, which prompts him to turn to nefarious means, and Devlin, to make his move...

Upon this viewer's first encounter with The Tarnished Angels, one immediately encountered just how lush, and beautifully shot it is. Indeed, it was a trademark of Sirk's films, but unusually, this one was shot in black-and-white, straying away from the director's keen eye for colour. He was known for infusing his scenes with bold Technicolor splashes of vivid colours and creating great character in his visuals alone. Here, Sirk and cinematographer Irving Glassberg achieve the same feat via different means. They photographed a desperate, extreme situation in an appropriately stripped down manner that showcases great depths and detail.
What really sets the move apart though, is the setting. Ragged showmen, underappreciated dames, and lousy paychecks are the order of the day, and a genuine sense of loneliness and despair suffocates the air. The central couples' son longs for attention, as his mother does, and as does his father, but all in different ways, and from different sources. Everyone involved has desperate needs, and struggle to not become swept up by circumstance.

The mid-air stunt sequences hold up as worthwhile spectacles today, ranging from perfectly adequate, to breathtaking instances of photography. As Hudson looks on, the rear-projection is integrated brilliantly adding depth and drama to the shots that help add drama to the mid-air antics. In one instance, a mid-air collision serves up a violent, impacting result that is brutal despite being bloodless. Later, a race sequence provides thrills way ahead of Sirk's time.

It isn't without modern flourishes however; the dialogue sizzles with innuendo, while the overall aura of decay would sit right at home with the most cynical recent assessments of excess. A moment of lust is interrupted by the literal face of death- albeit in the shape of a costume party gate-crasher. The scene wouldn't be out of place in a post-modern horror tale.

The delightful scenary and compelling plot are well supported by a superb cast however, who bring a disciplined sense of the real to such high stakes antics.
As Roger Shumann, Roger Stack immediately gives off an air of unlike-ability. He's neglectful, and caught up in his own daredevil reputation. That isn't to say redemption isn't possible however- Stack's ability to stay on the right side of exaggeration ensures the complexities of his behaviour prevent him from being over simplified as a villain. Most viewers will find his dilemma increasingly understandable and his intentions less easily pigeonholed as the film progresses.
Shumann's wife LaVerne by contrast, provokes instant empathy, conveying a sense of longing and detachment from a life left behind. She's brilliantly played by Dorothy Malone, sympathetic without coming across as weak. Being a fifties melodrama, this is of course, a touch heavy handed at times, particularly as she discusses reading with lead man, Burke Devlin (Played with great conviction by Rock Hudson). As the plot unravels though, the frisson generated by such scenes is vital, and adds to the simmering emotion that slowly builds in a controlled, and increasingly gripping fashion.

The Tarnished Angels really is a remarkable film; at time approaching a Noir-esque tone, albeit packaged int he form of melodrama. Subtlety isn't Sirk's strong point here; angst and lust are written all over the characters' faces. With that said, such bold sporting of hearts is perfectly appropriate. The anguish and obsession is palpable throughout, leading towards a climax wrought with tragedy.

In what is not a huge surprise, this release comes with Euerka's trademark slew of extras, which are largely very good indeed and help add weight and importance to this release.

Adrian Martin's commentary is a little dry and academic, an example of one which would really benefit from a second person with whom he could play off. Nonetheless, it's informative and his passion is commendable. The piece with Douglas Sirk himself is an archival collection, which affords the opportunity to hear from the director himself- alone that's enough to make it worthwhile and unique to the other material on offer.
The best of the extras however, comes in the form of Bill Krohn's excellent interview, which takes us through Sirk's career in the shape of some wonderful stories and anecdotes. William Schallert's interview segment is also a gem, although he doesn't dig as deep as Krohn, he's a great subject. In all, an excellent assortment.

Aged much like a vintage wine, Tarnished Angels offers all of the charm that one could imagine from a melodrama that originated in the 50's.
A superbly clean, crisp image, and an excellent package of special features perfectly compliment a film that that deserves to be revisited and rediscovered. The Tarnished Angels is both a worthy addition to the Masters of Cinema line-up, and to your Blu-Ray collection.