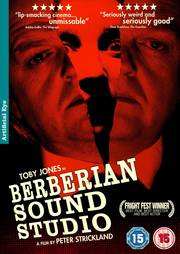 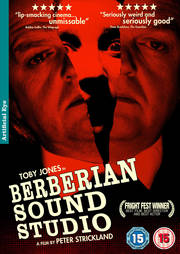 Article
Supernatural horror The Haunting in Connecticut 2: Ghosts of Georgia creeps onto DVD and Blu-ray in March
Recently Added Items 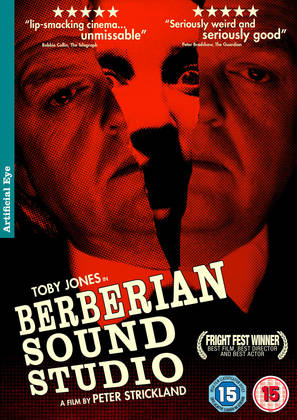 “ This is not a horror film… this is a Santi film!”

A Giallo inspired piece of cinema about the sound mixing of a piece of cinema? Certainly in the concept alone, Peter Strickland’s curiosity Berberian Sound Studio, offers something refreshingly different. Remarkably, the resulting sensorial onslaught is every bit as imaginative and abstract as the initial seed itself.

There’s something unsettling about Berberian Sound Studio, right from the outset, something rotten contained within a relatively flimsy plot.
Toby Jones plays Gilderoy, a timid Englishman who accepts an offer to head to Italy. There, he us tasked with arranging the sound mix on trashy Euro-sleaze opus, The Equestrian Vortex. Directed by the pretentious Santi, Vortex is a volatile cacophony of hacked flesh, orifice-prodding, lunatic chanting, outlandish wailing, and err, female horse-lovers. For aficionados of classic European trash cinema, it actually looks marvellous! For Gilderoy though, the experience is an utter nightmare. His most recent accomplishment being a restrained documentary about the nauseatingly quaint Dorking countryside, his gentle demeanour is quite unprepared for this anything goes grotesque endeavour. Running into difficulties with the shifty Italian operation’s approach to paying him, Gilderoy finds working with blunt, sardonic producer, Francesco, an extreme strain. He’s sabotaged by the protective resident technicians, and slowly, but surely, he becomes absorbed into the work as his life becomes a nightmarish, surreal amalgamation of terrifying celluloid and real-life claustrophobia & madness. 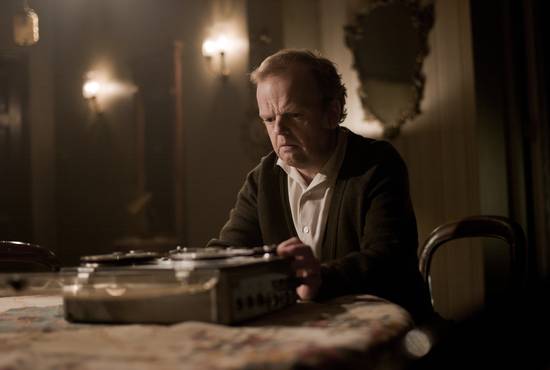 Obviously, there’s an air of inevitability about the film- Gilderoy’s journey is a descent into a hellish nightmare reminiscent of the film that is manipulating. His life falls apart as he becomes manipulated by his own disintegration, much like a mere character on screen. However, the details contained within the journey are at times, fabulous. Berberian Sound Studio is unlike anything else. It is a film obsessed with processes, with technical details and a kind of inspection of the perils of an all-consuming occupation. It’s not all doom and gloom of course. The interaction between Gilderoy and his less stuffy colleagues is often laced with wit and charm, if not a blackly humorous strain of menace. The juxtaposition of Toby Jones’ awkward Englishman with the Italian director’s brash straightforward character works perfectly. More importantly, Jones is terrific. He’s perfectly believable as an uptight, shy and introvert genius, tinkering with his art. He’s also frustrating at times, as all good fish-out-water are, but we never lose our sympathy for him. His discomfort is palpable, as he is tasked with bludgeoning vegetables in an assault with a blade, bullying wayward actresses, or liquefying items in a blender. The scenes in which he gets carried away stabbing vegetables particularly, are both fascinating and extremely uncomfortable, Nearly an hour in, and the simple act of walking down a corridor at the studio becomes a hallucinogenic trip for Gilderoy. His discomfort is approaching madness. 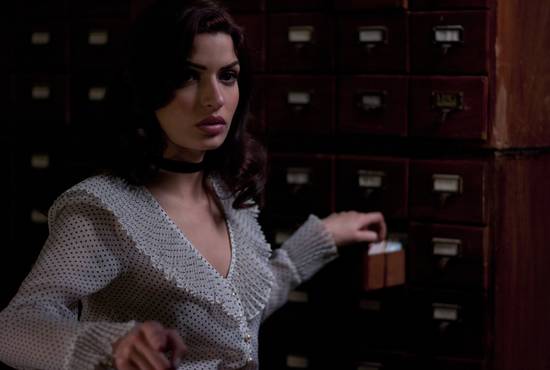 In many ways, one appropriate companion piece to Strickland’s film could be found in
Hélène Cattet and Bruno Forzani’s beautiful Giallo tribute, Amer. Berberian Sound Studio exists as almost as an audio equivalent to the 2009 films beautiful depiction of the genre entirely within a series of striking images. But while Amer’s tale of awakening was visually seductive, Strickland delivers an uncomfortable suffocation of the auditory system. Only in the climax does he steer proceedings towards the beauty and gloss of the tradition, preferring instead to wallow in the depths of claustrophobia and discomfort.
Obviously the main attraction of this film is it’s soundtrack. It’s a raging, spiralling creation, dipping between celluloid insanity and practical solutions as if Sonic Youth hooked up with Goblin and only had household items at their disposal. The opening title music for The Equestrian Vortex is utterly stunning, and like many of the moments on Berberian’s eclectic mix, it perfectly reprises the hues and beats of many classic Giallo moments.
Therein lies the real strength of Strickland’s achievement. It doesn’t tell an especially absorbing story, or create overly iconic imagery. What it does, is provide one of the most intriguing experiences in sonic madness possible for those who appreciate their horror with a dose of innovation and sophistication. 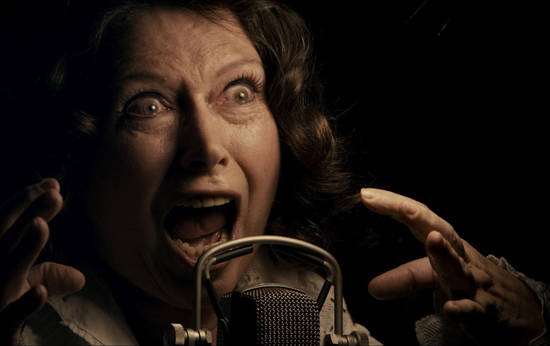 Extras
Absolutely stacked for a new feature release that doesn’t fall into block-buster territory.
An interview with Director, Peter Strickland, ticks the boxes and is pretty illuminating. The one-camera perspective does grate eventually given that the feature goes on for over half-an-hour, but it is certainly a minor quibble when confronted with such thoughtful insights. Yes, it’s a little dry, but a good effort nonetheless.
Meanwhile, a forty-six minute “Making Of” feature absolutely zips by and the multitude of perspectives really helps it stand out as a much more enjoyable piece. It’s a little ramshackle, but hardly dull at any point, and certainly a cut above the usual fluff pieces.
Deleted Scenes amount to a whopping twenty minutes, and better yet, they’re either annotated or include commentary that both describes the scenes, and explains their exclusion. These scenes vary in both tone and content, ranging from the gently witty to seriously intense.
Elsewhere, there’s a Production Design Gallery, which also goes above and beyond via a narration; a trailer, and an informative Director’s Commentary.
Enthusiasts will most likely find themselves excitable over the inclusion of “Box Hill”: Gilderoy’s nature piece, and Strickland’s ludicrous but enjoyable short Berberian film, which was the initial basis for the whole endeavour.

Overall
There really is nothing else out there like Berberian Sound Studio, it’s an utterly unique experience, and that alone ensures that it is essential.
To really appreciate the film, one has to absorb the multi-layered soundtrack, a spiralling cacophony of wailing, hissing and groaning, arranged as if David Lynch plucked his favourite moments from the Giallo landscape. It’s not a film for everyone- those expecting grue, or even traditional horror elements will perhaps be disappointed. But for viewers seeking something different and challenging, this is a fabulous assault of the senses, guaranteed to remain etched in the brain (and the cochlea).