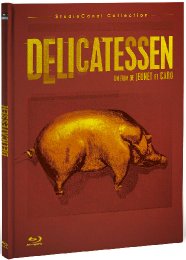 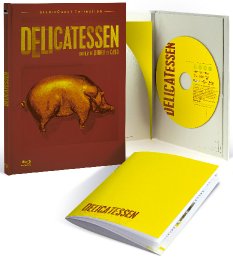 It's difficult to think of it now, with Jean-Pierre Jeunet as a fairly respected director and industry figure who has made such films as Alien: Resurrection, A Very Long Engagement and Amélie, that he was once a struggling filmmaker who couldn't really get his short film critically accepted and no one would touch the screenplay that he and Marc Caro because of its dark subject matter involving cannibalism. Thanks to the persistence of his producer, the screenplay was eventually picked up and, with a fairly low budget, Jeunet and Caro began filming their debut feature, Delicatessen.

Set in a post-apocalyptic at some undefined period in the future when belongings are scarce, money has disappeared and people buy things in corn, the film is set entirely in one apartment block where the butcher who runs the delicatessen on the ground floor, places advertisements for a handyman who, turning up for the free room and steady employment, are driven insane by the residents and eventually killed by the landlord, a butcher who serves them in his delicatessen to the apartment residents. The film begins with the latest handyman covering himself in brown paper to disguise himself as garbage, putting himself out in a dustbin where he hopes the refuse disposal wagon will take him to safety. Things don't exactly go to plan as the bin is dragged inside the shop and, when the lid is opened, he is met by the butcher brandishing a meat cleaver. 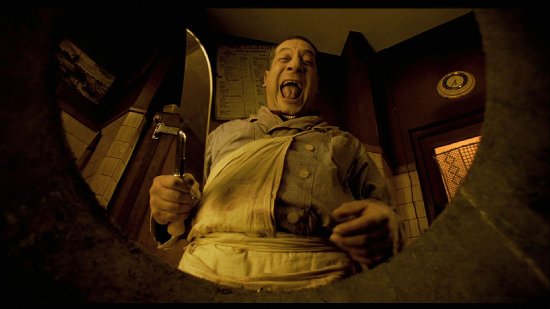 When his replacement shows up, the butcher isn't exactly keen to employ him because he is quite short and not particularly heavy but the man persists and, with mouths to feed, the butcher decides to take him on. This turns out to be a little bit of a mistake because the butcher's daughter, who considers it extremely wrong that her father hires people just to kill them and sell their meat to the residents, develops a soft spot for the new employee which is reciprocated with tales of when he used to be a circus clown with a performing monkey called Dr Livingstone.

The apartment block is teeming with oddball characters from the young children who are intent on sabotaging anything and everything to the woman who thinks that the voice emanating from the pipes in the bathroom is in her head and is now desperate to commit suicide and a man who has purposefully flooded his apartment in order to keep snails and frogs which he then eats. When you throw into this a vegetarian underground resistance movement known as the troglodytes, you quickly realise that this is not going to be your everyday mainstream movie and do something altogether much more surreal, offbeat and dark. 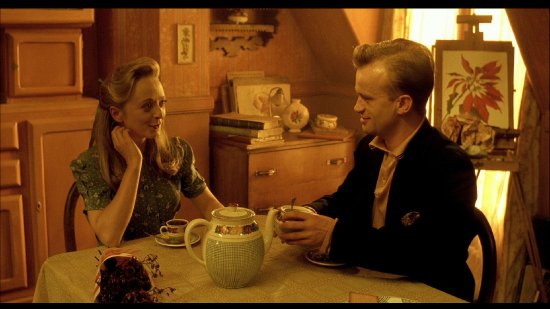 As a debut feature, this is extremely ambitious and there are many who say it changed the face of French cinema and opened the doors to other filmmakers whose work was not going to be conventional or typically 'French'. The emphasis on dark humour, surrealism and extraordinary mise en scène creates something extremely special, memorable and groundbreaking. Jean-Pierre Jeunet and Marc Caro worked together on two films with this as the first, with City of Lost Children following four years later. I like just about everything they Jean-Pierre Jeunet has done, even considering Alien: Resurrection to be a far more interesting film and most people give it credit. Of course, his biggest hit is Amélie which appears on many people's 'Top 10 Favourite Films' lists and it's surprising how much black humour and similar mechanical machinations exist from one film to the next. There are so many weird and wonderful contraptions in this film (and even the entire revenge plot in Micmacs) seemed to be based on a Heath Robinson-like ingenuity for making everything far more complicated than could be. This is perfectly illustrated in the case of Mrs Interligator who is desperate to kill herself but comes up with the most extreme, weird and wonderful manners in which to commit such a deed from lying in the bathtub with a lamp on the site which is standing on some fabric attached to a sewing machine on the other side which will only operate when someone presses the doorbell! 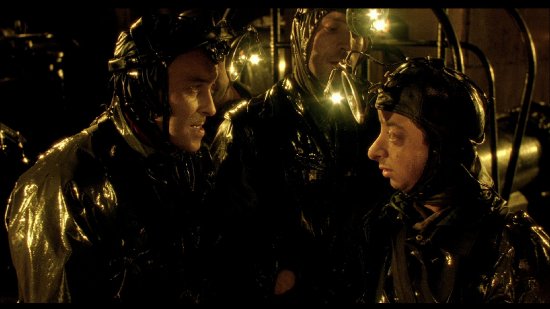 I imagine that this will appeal to those who know and love things that are dark, extraordinary and slightly wacky and, if you haven't seen Jean-Pierre Jeunet's early work, then you really should as you're missing out. This was the first film in which Jeunet worked with Dominique Pinon, an actor with an incredible physiognomy who has gone on to work with Jeunet on just about every film he has made. As Louison, he is a wonderful character actor who brings a massive amount of life into the central character and strikes up a plausible relationship with Marie-Laure Dougnac's Julie, the landlord's daughter who is extremely shortsighted and an absolutely charming woman.

I think Delicatessen is a wonderful film with great originality, invention and visual flair and is an absolute joy to watch.

Extra Features
The commentary with Jean-Pierre Jeunet is replicated from the previous DVD release and, although it's been several years since I listened to it, I quite happily listened to it again (or should that be read it again, as it is in French with English subtitles).

Making of: Fine Cooked Pork Meats is the rather strange English translation of the French title of this 13 minute making of that covers just about every aspect of the film's construction from genesis to how the more extravagant effects and stunts were done. It isn't the most comprehensive of behind the scenes featurette that I've seen but it does its job and is well worth a watch.

Main Course Pieces (65:28, SD) is a decent companion to the making of with interviews with Jean-Pierre Jeunet, Dominique Pinon, producer Claudie Ossard and many film writers and directors who talk about what a difficult film that wants to get off the ground and how important it is when one considers contemporary French cinema as a whole. At over an hour, it is extremely comprehensive and goes into great detail about its place in modern cinema, how parts of it were made and how they came up with the idea. Some of the information in here is also in the commentary so, if you not a big fan of those, you can watch this and hear some of the same anecdotes and recollections.

Jean-Pierre Jeunet's Archives (8:43, SD) brings together some rehearsal footage and other material shot before the film was made including a rehearsal for a scene that was never made and the filmmakers going around the set working out where each scene will be shot and how would be the best way to film them. It's quite strange watching the actors perform scenes that you know when they aren't in costume, have different hairstyles (or, in the case of Dominique Pinon, a full beard) and with extremely different sets.

There is also the theatrical trailer and a teaser trailer to go with a booklet which contains an essay by Adam Woodward from the Little White Lies website which is a good read and a very welcome addition to this set. 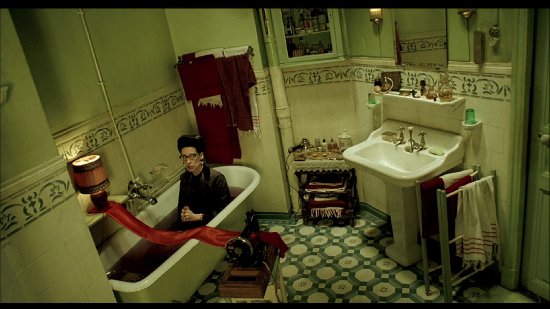 The Picture
Jean-Pierre Jeunet and Marc Caro make films that are visually distinctive and, with their cinematographer Darius Khondji, came up with an ingenious way to get the colour and contrast they wanted by shooting everything with far more colour than necessary then, in post production, unsaturated the stock by slightly bleaching it which gives the finished film and extremely vibrant and strange look with colours standing out are more than they should.

It takes a few viewings to get to know the layout of the apartment block as, the first time I saw it, I thought that the man with the frogs and snails lived in the basement not above the two brothers who manufacture the canvas that 'moo' when you turn them over. 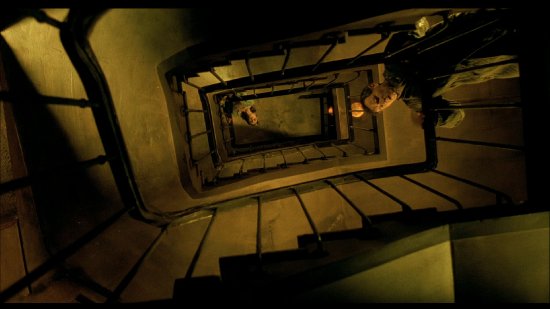 The Sound
The DTS-HD Master Audio 2.0 surround track is extremely good, presenting the dialogue clearly and coping with the multitude of ambient sounds, from water dripping to wind blowing and floorboards creaking very well, doing almost as good a job as a 5.1 soundtrack would.

The score, by Carlos D'Alessio perfectly complements the visuals with a slightly strange and off the wall range of music and this intertwines with the superb sound design to create something memorable that really helps to create and maintain the atmosphere. 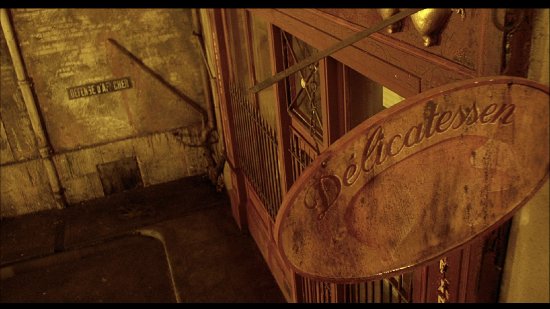 Final Thoughts
I think Delicatessen is a very special film with remarkable performances by the entire cast, particularly Dominique Pinon, and the writing, set decoration and direction by Jean-Pierre Jeunet and Marc Caro is just fantastic. I think this is a better film than City of Lost Children, but that's not by much and this is nearly as good as Jeunet's solo films although it is far darker and much more surreal than Amélie.

Whether you buy this or not will depend on your love for the film and whether you own (and are happy with) the DVD; I think the AV improvements and extras package, including the excellent booklet, do make an upgrade worthwhile.