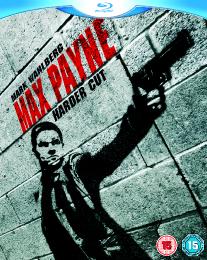 Synopsis:
It's time to lock and load your Home Entertainment system. Mark Wahlberg is bringing carnage and retribution to the small screen on the 13th April as the grizzled, trigger-happy cop, Max Payne, in the highly-stylized movie adaption of the cult video-game. Hell-bent on revenge, the film follows Payne as he tears up the streets of an eerily quiet New York in a bid to find those responsible for the brutal murder of his family.

Brought to life by Director John Moore (Behind Enemy lines, The Omen) Max Payne is a rogue cop, hot on the trail of a killer and desperate for vengeance. Armed with his gun and a 'nothing to lose' mentality his investigations take him deep into a conspiracy-addled underworld, riddled with experimental drugs and unimaginable betrayals.

When his inquiries bring him head-to-head with sexy Russian mobster Mona Sax (Mila Kunis; Family Guy) his mission takes a violent twist as they join forces to take down the those responsible for the deaths of his family and her sister.

John Moore's atmospheric and noir-esque take on the classic computer game unfolds in the murky back alleys and dingy night clubs of a dark and rain-lashed New York. Bathed in shadows and with supernatural enemies lurking around every corner, Max Payne is a twist-riddled, conspiracy-soaked thriller, guaranteed to keep viewers on the edge of their seats.

Also starring Chris O'Donnell (Batman Forever, Scent of a Woman), Olga Kurylenko, (Quantum of Solace, Hitman) and Beau Bridges (Jerry Maguire, My Name is Earl), this Harder Cut of the original film seen in cinemas also features a cool Animated Graphic Novel. And for all Blu-ray owners experience the full package with Picture in Picture video guides taking you into the scenes, a Director commentary, D-Box capabilities and Digital Copy of the film to download.

Special Features:
• Harder Cut of film
• Digital Copy - allows you to download a copy of the film to your computer and portable devices
• Picture In Picture feature: 'Walkthroughs & Cheats' - Watch the Making of over 30 scenes from Max Payne with behind the scenes footage that plays in a frame within the picture
• Commentary by Director John Moore, Production Designer Daniel Dorrance and Visual Effects Supervisor Everett Burrell
• Animated Graphic Novel - Story of Michelle Payne
• D-Box capabilities (Motion activation to be used with a D-Box chair)