Blu-ray
A Tale Of Two Sisters

My Name Is Bruce 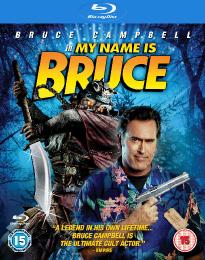 Synopsis:
Bruce Campbell stars as Bruce Campbell, a womanizing, booze-addled B-movie star, who bears nothing but contempt for his loyal fans and has an unfortunate habit of 'drunk-dialling' his ex-wife Cheryl (played by Ellen Sandweiss, who 'coincidentally' starred as Cheryl in 'The Evil Dead'). When reckless teenager and Bruce-obsessive, Jeff Graham (Taylor Sharpe), accidentally awakens the ancient evil spirit and Chinese protector of the dead (and bean curd!), Guan-di, in the small mining town of Gold Lick, Oregon, he can think of only one man capable of preventing the demon from wiping out the town's entire population. Forced by circumstance to take desperate measures, Jeff takes it upon himself to kidnap his idol and delivers him to the townsfolk of Gold Lick. Believing the whole scenario to be part of birthday prank arranged by his agent (Ted Raimi, in one of three roles), Bruce gamely plays along, not least because he sees it as an opportunity to try out his charms on Jeff's hot mom while consuming plenty of free liquor. The star's willingness to play along soon changes, however, when he finally confronts Guan-di and discovers the demon isn't just some harmless stunt guy in a rubber suit!