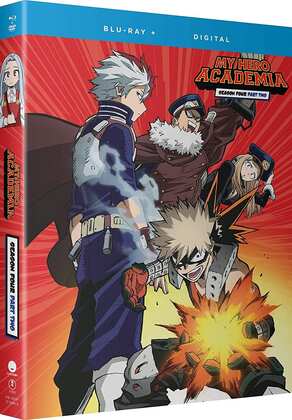 The mark of a decent show is how invested you can remain, given a lengthy gap between episodes or instalments. There are series where just leaving a gap of a month or so between episodes can throw me out of the experience, and I forget the story or the characters. It’s been almost a year since the last release of My Hero Academia, and now that My Hero Academia Season 4 Part 2 is here, I find that it didn’t take long at all for me to pick up with the show again. Admittedly, the new collection starts a new arc just one episode in, which helps. But My Hero Academia turns out to be a memorable action adventure that is easy to stay invested in, even if the character names don’t stay in the mind. Click on the review to read more. 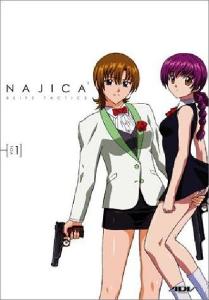 Najica Blitz Tactics. This is proper old school; it was old school when it was made, so you could even call it old school squared. Najica Blitz Tactics is a show from around the turn of the millennium, an early digipaint show, where the animators were still having issues with displaying line-art without aliasing. On top of that, the narrative style and content of Najica Blitz Tactics harks back to the cyberpunk anime of the late eighties and early nineties, with an emphasis on cool sci-fi action with a whole heap of fan service. From the makers of Stratos 4, this is a specific kind of fan service which is more about camera angles and the male gaze than anything in story. Najica is a secret agent whose day job is as a perfumer, but who saves the world by night. Her life gets complicated when she recovers a Humaritt on a mission. A Humaritt is an artificial life form that resembles a human, but doesn’t have the same emotional responses. And Najica learns that the one that she recovered, Lila is to be her new partner. Superhuman strength is all well and good, but Najica has to be teacher and babysitter as well for the little girl lacking in social skills. And it turns out that a whole lot of Humaritts are on the loose, and have fallen into the hands of a bunch of questionable people.

Najica Blitz Tactics is a whole lot of fun, even now, although you have to make accommodation for that fan service mindset, and the plethora of panty shots. ADV Films released the show in three DVD volumes in 2004. Here’s my review of volume 1. There was subsequently a complete series boxset in 2008. Naturally it’s all deleted. Second hand is your best bet at this point, and looking around, it seems the UK release is a lot more reasonable than trying to source the US release.

Funimation UK released My Hero Academia Season 4 Part 2 on Blu-ray and on DVD on the 13th of September. The Limited Edition Blu-ray came out on the 1st of November.