That partnership will be dissolved in a couple of weeks, and it’s all down to corporations spoiling it for the little guy. AT&T bought out Ellation, Crunchyroll’s parent company, and Sony bought Funimation, and Sony and AT&T don’t want to play together. What that means for us is that Funimation content will be repatriated to Funimation and CR content to them, no doubt requiring that we buy two streaming subscriptions instead of just one for the same content. What this also means for physical distribution is yet to be seen, but one thing seems clear; Sentai who had a lot of shows streaming through Crunchroll before the Funimation tie-up are likely to return. Certainly HIDIVE quickly took the VRV slot that Funimation vacated. 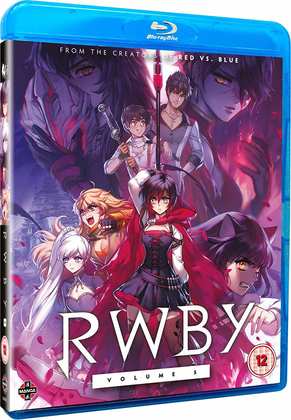 Everyone decides to release everything at the same time, or so it sometimes feels. That’s why I’ll probably be playing catch-up until Christmas. Take Manga’s resumption of Rooster Teeth releases for instance. They released two Red vs. Blue titles on the same day, and they also released two RWBY discs on the same day. It’s easy to buy, but not as easy to watch, and certainly not as easy to review in short order. That’s why the review for RWBY Volume 5 went up last week, a little while after Volume 4. It’s the continuation of the storyline, adding more mystery and intrigue in the world of Remnant, while maintaining the show’s reputation for action and excitement. But something doesn’t quite click with the fifth season. Click on the review instead to see what I mean. 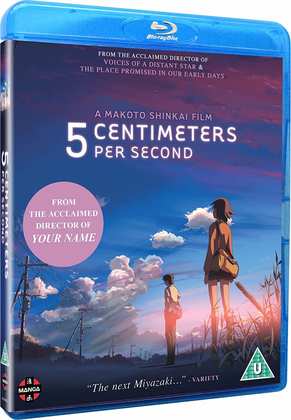 Here’s a review that I never thought I’d get to write, a review for the 5 Centimetres per Second Blu-ray. Of all the Makoto Shinkai works that have been released in the UK this has been the hardest to get in high definition, but Manga Entertainment have finally managed it. It’s a devastatingly beautiful film, made all the more vibrant in high definition, and it’s also the finest example of pure Makoto Shinkai as you’re likely to get, as he examines the themes of separation and roads not taken, choices not made. 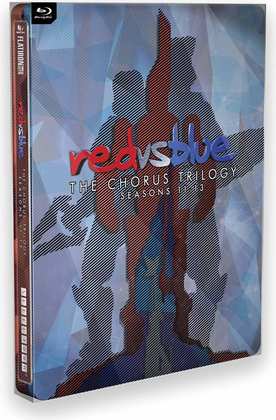 I finally dusted off my copy of the Red vs. Blue - The Chorus Trilogy Steelbook and gave it a watch. Machinima is the art of storytelling through the manipulation of videogame avatars, and Rooster Teeth are the finest exponents of this, using the Halo game to create a world of action and comedy, with the dumbest soldiers in the galaxy. The Chorus trilogy starts off slowly, but with each new volume its gains in dimension and pace, telling a gripping story with colourful characters and a sense of comic timing that just works. 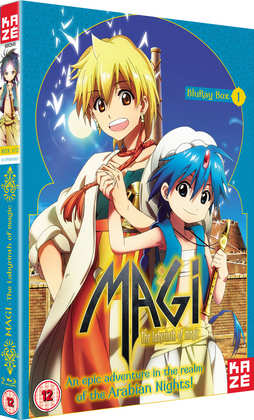 Magi: The Labyrinth of Magic. When I first saw this series, I was impressed at just how groundbreaking it was, with an anime show breaking out of its usual milieu of high schools and giant robots to tell a story in another land, another time, based on the classic Arabian Nights tales. Of course I hadn’t seen Osamu Tezuka’s 1001 Nights at that point, but you can’t really compare the two. One is a ribald sex comedy, while Magi is a shonen action show in exotic clothing. But they really do capture the right tone for this anime tale of Aladdin, Ali Baba, and Sinbad, both in terms of the music and the world and character design. It’s a world of djinns and labyrinths, as various characters vie for ultimate power, and it’s the Magi, like Aladdin who are the power brokers in this world. But above all, it has a girl who can kick her way through a giant monkey!

Manga Entertainment distribute Magi: The Labyrinth of Magic and its sequel for Kaze Entertainment in the UK on Blu-ray and DVD. Here’s my review of Part 1. For a long time, we were the only game in town for high definition Magi, but last year Aniplex US finally got with the program, and upgraded their DVD only releases to high definition as well. But expect to pay Aniplex US prices if you want to import instead of buy locally.

Manga Entertainment all the way this week, with RWBY Volume 5 released on Blu-ray and DVD on the 1st of October. They release the Blu-ray of 5 Centimetres per Second on the 29th of October. The DVD was released back in 2011 and is still available. Animatsu released the Red vs. Blue Chorus Trilogy as a Steelbook Blu-ray back in 2016, but more importantly, the final third of that trilogy, Red vs. Blue Season 13 finally received a standalone Blu-ray and DVD release on October 8th.