As mentioned in last week’s review round-up, it’s usually the turn of the year that has the anime industry hit a few roadblocks and snags. At the end of last week MVM announced that three of their forthcoming titles will be delayed. The Otorimonogatari Blu-ray will now be coming on the 9th of February (the DVD is unaffected), Battle Girls Time Paradox will be out on the 16th of February, while the Shangri-La Collection will also be out on that date.

Manga had more of a nightmare week, when Amazon sent e-mails to pre-orderers of Evangelion 3.33 informing them of the cancellation of the release. This wouldn’t have been too bad, long delayed titles often get cancelled this way, but Amazon then added that Manga would no longer be releasing the title. A wave of panic had spread though the fanbase before Manga got their damage control into order. Anyway, they will still be releasing Evangelion 3.33, but only after Funimation and Studio Khara sort out the film’s dub, which at this rate will probably be after the fourth movie has been released.

But if you have been checking online listings, you might have noticed that Manga’s release of Samurai Bride has slipped from January 26th to April 6th. The Harlock Space Pirate live action movie release has also slipped to April 27th, while Anime Limited’s Wings of Honneamise is now set for March 23rd, and Blood Lad has slipped slightly to the 2nd of February. 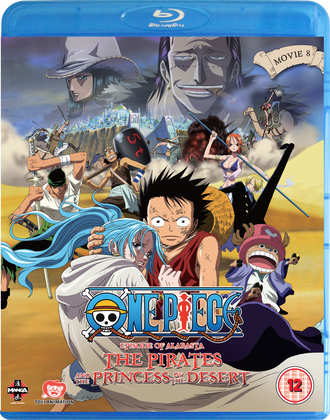 One review for you last week, or rather re-review as I took another look at the 8th One Piece Movie, a.k.a. One Piece - The Movie: Episode Of Alabasta, this time on Blu-ray. It’s the one movie out of the nine that Manga released in DVD collections to get a dub, hence its solo outing in HD, and for me it’s still the weakest of the nine, imperfectly re-telling a story that was told to much better effect in the TV series. But the visuals do get an upgrade for the film’s epic scope, and that is even more apparent in HD. Unfortunately the audio doesn’t live up to that. Click on the review to read more.

One Piece - The Movie: Episode Of Alabasta was released on Blu-ray and re-released as a single DVD by Manga Entertainment last Monday.