Every year around this time, NEO Magazine takes a look forward to 2015, and what delights will come soon, and that inevitably means that a few previously unknown titles will be revealed. There’s nothing from Anime Limited, and for a change, nothing new from Manga Entertainment either, however a couple of MVM titles were revealed, Log Horizon on DVD and Blu-ray next Spring, and Muv Luv Alternative Total Apocalypse on DVD and Blu-ray in Summer. 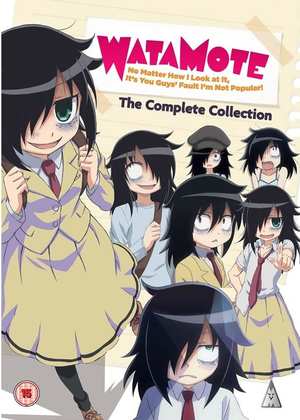 Speaking of MVM, it was their release of Watamote: Collection that comprised the entirety of last week’s anime reviews. Watamote is a comedy that looks at the lower rung of the societal ladder, the socially awkward, geeky dropouts. In this case it’s high school student Tomoko Kuroki, a girl whose interests in the otaku side of things has led to her being the odd one out in Middle School. But now she’s starting high school, she’s determined to become liked and popular. Unfortunately, her shyness, lack of social skills and general personality keep getting in the way. Click on the review to read more about this exceptional series.