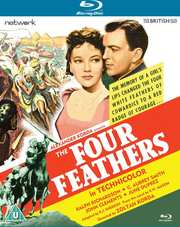 Let's finish off the week how we began, with a final release from The British Film collection label courtesy of Network Distributing. Out on both DVD and Blu-ray this coming 23rd June is Alexander Korda's adaptation of The Four Feathers.

Based on the novel by A.E.W. Mason and written by R.C. Sherrif, this has a music score from Miklós Rózsa. and stars John Clements, Ralph Richardson, C. Aubrey Smith and June Duprez.

Presented with a brand new transfer made from original film elements in its as-exhibited theatrical aspect ratio, extras include an interview with Ralph Richardson, image galleries, original trailer and A Day at Denham newsreel featurette, whilst the recommended retail price will be £14.99.

Harry Faversham, born into a distinguished military family, automatically joins the army with three close childhood friends, Durrance, Willoughby and Burroughs. Quickly feeling that he is unsuited to the army life, and newly-engaged to Ethne, he resigns his commission, only to be accused of cowardice by his friends.

Each sends him the traditional white feather in contempt, the fourth is plucked from Ethne’s fan. Realising the disgrace he has brought to himself and his family, Harry sets out alone to the distant war to redeem himself.