Comedy farce Nothing Barred lands on DVD this May 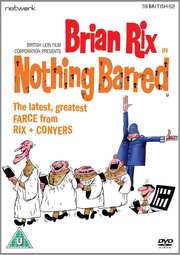 Another day, another release from Network Distributing and The British Film collection. This time the DVD is out on 12th May and is none other than 1961 English comedy romp Nothing Barred, also apparently known as The Night We Sprang a Leak.

Presented with a brand-new transfer from the original film elements, in its original aspect ratio, this comes with a recommended retail price of £9.99.

Once again no trailer to bring you, just a synopsis.

Penniless Lord Whitebait’s plan to save his sinking fortunes is to open stately Whitebait Manor to the public. But the public ignores his gesture, and his fortunes fade even further, with a stream of debts threatening to run into a deluge when his daughter’s fiancé demands a plush and costly wedding.

Where is the cash to come from? Whitebait and his servant Spankforth’s answer is a scam involving the theft of a valuable painting from the Manor. How could such a cunningly original ruse fail?