DVD
The Belles of St Trinians

Blu-ray
The Belles of St. Trinian's

The Belles of St Trinian's: 60th Anniversary Edition comes to Blu-ray and DVD this April 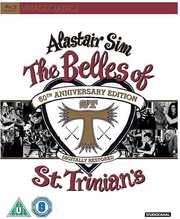 Fans of classic black and white features will be thrilled to see what StudioCanal have coming their way on 28th April. Arriving on both Blu-ray and DVD is The Belles of St Trinian's: 60th Anniversary Edition.

Directed by Frank Launder and written by Launder with Sidney Gilliat, this stars Alistair Sim, Joyce Grenfell, George Cole and Beryl Reid. This will feature a fully restored HD transfer in its original 1.66:1 aspect ratio and mono soundtrack.

This comedy is set in the fictional St Trinian's School. The unruly schoolgirls of St. Trinian’s are more interested in men and mischief than homework and hockey.

But greater trouble beckons at the school when the arrival of Princess Fatima of Makyad coincides with the return of recently expelled Arabella Fritton, who has kidnap on her mind.