Birmingham MCM Comicon (or is it Expo?) News

Conventions already? This weekend saw the annual anime convention juggernaut begin to pick up speed with Birmingham first on the itinerary. It was only Manga Entertainment who had a panel for announcements at this time (You can see the previous week’s Review Roundups for MVM’s big news of the spring), and everyone was glued to the Anime UK News Twitter feed for info. So it’s cut, paste and comment time...

The biggest surprise and quite big news too was that Manga have the One Piece movies. They’re bringing out Strong World on DVD and Blu-ray this June, which is less of a surprise. What is a shock is that they have movies 1-9 as well. So far, Funimation only have movie 8, and consequently that is the only film that will get a dub and sub release in the UK. Movies 1-7 and 9 will be released as subtitle only, and all nine movies on DVD only. Still, the One Piece movies ahead of the US is something to crow about.

Less of a surprise but good news nevertheless is the announcement of the most recent Ghost in the Shell feature series, Ghost in the Shell Arise. To date, Funimation have only released the first two movies as Japanese subtitle only imports. They are yet to create a dub for the US domestic release, so you can guess that Manga’s release won’t be for quite a while yet.

There was clarification on the Attack on Titan release (now not a steelbook) which actually muddies matters a little more.

Quote:
Attack on Titan Part 1 will be coming to DVD, Blu-ray and as a Blu-ray Deluxe Collector's Edition package on 15th September. Part 1 will include episodes 1-12 of the series.

The Blu-ray Deluxe Collector's Edition version will have:
-Episodes 1-12 over 2 Blu-ray discs.
-A bonus DVD disc containing over 100 minutes of bonus material.
- A 24-page booklet.
- A box cover that will be able to house both Part 1 and Part 2 when released.

Surely the Blu-ray will have extras, especially if you’re using the US masters which at this time are listed as Region AB. So what’s going to be on the bonus DVD? Or are you stripping the extras from the Blu-rays, mastering your own, and then sticking the extras on the DVD? Fans are confused...

Another Shinichiro Watanabe and Yoko Kanno collaboration is imminent

Shinichiro Watanabe’s presence in the West has exploded in recent years, after a somewhat lengthy gap following Cowboy Bebop and Samurai Champloo. He returned with Yoko Kanno on soundtrack duties with the sublime Kids on the Slope, and right now you can watch the epic Space Dandy series being simulcast online (Incidentally, Season 2 of Space Dandy has just been confirmed for UK streaming by Anime Limited and Wakanim this July) . Coming this July, and once again reuniting Watanabe with Yoko Kanno is Zankyo no Terror, or Resonance of Terror, although the English name on the advertising materials is Terror in Tokyo. I’m so excited I can’t even elaborate beyond that, except to say that I’ve already started putting money aside for the Blu-rays. Here’s the news from Anime News Network. 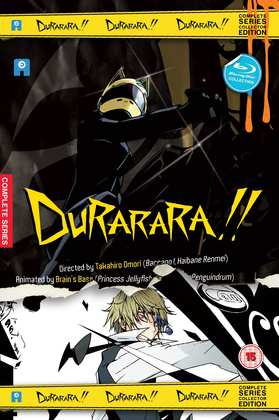 Just the one anime review for you this week, but it’s a big one, the UK Blu-ray debut of Durarara!!, which also happens to the UK debut of its dub. It’s a fantastic show which I have waxed lyrical about before. It’s from the creative mind behind Baccano!, a gripping story set in modern day Ikebukuro, with a similar approach to narrative, and a very engaging, character focused story. It’s also got a motorbike courier who’s looking for her missing head. Click on the review to read more, as a Review Roundup is too small a platform to do its wild story justice.

All the Anime release Durarara!! on Blu-ray today. They’ll be releasing a DVD version of it, also with the dub in May.