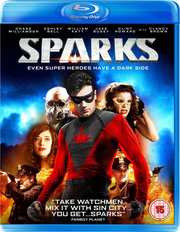 If you want a super hero film that isn't Marvel or DC, you have to look quite far these days, but thankfully Image Entertainment have your back with the 7th April release of Sparks, out on DVD and Blu-ray.

Based on the graphic novel series of the same name, this is adapted for the big screen by series creator Christopher Folino, and stars Chase Williams, Ashley Bell, Clancy Brown, Clint Howard, Jake Busey and William Katt.

With a runtime of 94 minutes, extras include The Making of Sparks featurette, deleted scene and commentary track, whilst the recommended retail price will be £12.99 for the DVD release and £15.99 for the Blu-ray.

The city is under attack from a deadly killer. A master villain who goes by many names and has many faces, all of them deadly. But who is he? Kevin Sherwood, Ring Master Jesus, The Matanza Killer? There's one person who needs the answer so he can start saving lives and that is Sparks.

When his parents are killed in a car crash fireball, Ian Sparks makes it his mission to fight crime. As a masked vigilante he burns with the desire for vengeance and soon discovers the dark side of heroism, where havoc is wreaked for profit and life is cheap.

Sparks joins forces with a band of mysterious super heroes who operate in the shadows, but what they have in common is more than Sparks can imagine and the cost of finding the evil villain and uncovering the truth may be more than he can afford.