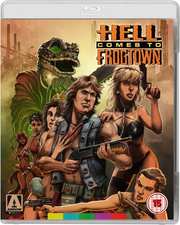 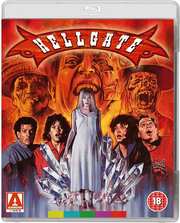 Oh what the hell, lame puns are far too easy to not use! Out on 27th January are no less than two films with the word hell in the title, arriving courtesy of Arrow Films as double format releases in the same box.

The first of these is Hellgate: Limited Edition, with apparently only 1,000 copies to get your mits on.

Legends abound of The Hellgate Hitchhiker. So the story goes, a beautiful young woman was once brutally defiled and murdered by a biker gang. Now, returned from the dead, she wanders the roadside luring unsuspecting motorists to their doom.

Refusing to heed the warnings of locals, a group of college friends set out on a cross-country road trip looking for fun and frolics. But they get much more than they bargained for when they wind up in the abandoned mining town of Hellgate and hemmed in by hordes of the undead.

Again the recommended retail price will be £19.99 for this combo release, and synopsis and trailer follow...

With the 20th Century drawing to a close, nuclear war has wiped out civilization as we know it. The embattled human race’s last remaining hope lies with one man and his loaded weapon.

Sam Hell may be an ex-con, but he also happens to be one of the last surviving fertile men on the planet. Now, under the custody of a group of feisty female fighters, Sam finds himself enlisted on a mission to impregnate a harem of beauties. Sounds cushy enough, but the ladies in question are prisoners of Frogtown, home to a gang of mutant and ill-mannered amphibians!