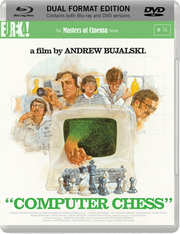 Another day, another Masters of Cinema announcement from Eureka Entertainment! This time we have the new Andrew Bujalski 80s period comedy Computer Chess turning up as a combo DVD and Blu-ray on 20th January next year.

The recommended retail price for the dual disc set will be £17.99.

A boldly intelligent ensemble comedy with a feel and atmosphere that surpass easy comparison, this takes place in the early-1980s over the course of a weekend conference where a group of obsessive software programmers have convened to pit their latest refinements in machine-chess and the still-developing field of artificial intelligence against an assembly of human chess masters.

Computer Chess is a portrait not only of the crazy and surreal relationships that come to pass between the abundance of characters who participate in the weekend event, but of the very era of early computing itself, and of the first, rudimentary video games, and if that weren’t enough, of the hopes and insecurities that persisted through the film’s retro digital age into the present-day.

That semi-virtual, hyper-social, maybe-kind-of-dehumanised landscape that, let’s face it, is our very own era. If that still weren’t enough... it’s also one of the wittiest, most shift-and-cringe-in-your-seat, and entirely LOL-hilarious movies of recent times.