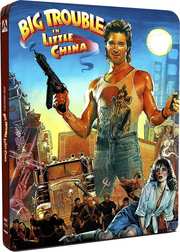 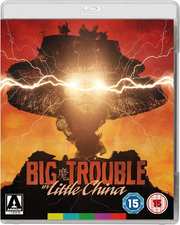 Sometimes, an actor and a director make a classic sci-fi horror film, and then just decide that the best thing to do after that success is make a comedy-adventure-action-ghost-movie. Thus it was that another classic was born, and for that we are truly grateful!

Arriving as both a standard and steelbook edition, priced at £19.99 and £24.99 respectively, the 1080p brand new digital transfer comes with 5.1 DTS-HD Master Audio and uncompressed stereo soundtracks, an isolated 5.1 DTS-HD music score, English SDH subtitles for the deaf and hard of hearing, and a commentary track with director Carpenter and Russell.

Also included is a booklet featuring new writing on the film by John Kenneth Muir, a re-print of an interview with production designer John Lloyd and make-up effects artist Steve Johnson. And the standard release will have a reversible sleeve featuring original and newly commissioned artwork by Jay Shaw, whilst the Limited Edition SteelBook is presented with the original iconic Drew Struzan artwork.

Jack Burton is a reasonable guy who is about to experience some unreasonable things in San Francisco’s Chinatown. As his friend’s fiancée is kidnapped Jack becomes embroiled in a centuries-old battle between good and evil.

At the root of it all is Lo Pan, a 2000-year-old magician who rules an empire of evil spirits. Jack goes to the rescue dodging demons, goblins and the unstoppable Three Storms as he battles through Lo Pan’s dark domain.