Blu-ray
The Princess and the Frog 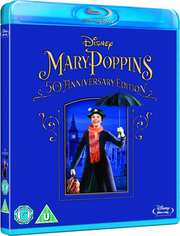 Gaw blimey guvnor, if it isn't the legendary family musical which everybody loves, for the songs and a certain really hilariously bad cockney accent by an American, yes rejoice lovers of classic movies because Walt Disney Company have announced the Blu-ray release of Mary Poppins: 50th Anniversary Edition for 18th November.

Now for the extras, which include ones on previous releases such as Disney on Broadway: Anything Can Happen If You Let It featurette, Step in Time never before filmed musical number complete with MP3 copy, Bob Crowley’s costume and design galleries with video intro, Poppins Pop-Up Fun Facts feature, Chimpanzoo deleted song, A Magical Musical Reunion featurette with Andrews, Van Dyke and Richard Sherman, A Musical Journey with Sherman, Supercalifragilisticexpialidocious: the Making of Mary Poppins featurette and The Cat That Looked at a King bonus short.

If you weren't sure, this film has a certificate U and a runtime of 140 minutes, and expect a recommended retail price for this release of around £14.99.

If you really honestly do need a synopsis and trailer, here we go...

Practically perfect in every way Mary Poppins flies out of the windy London skies and into the home of two mischievous children. With the help of a carefree chimney sweep named Bert, the spirited nanny turns every chore into a game and every day into a Jolly Holiday.