Article
Horror flick Grace arrives in US homes this September

No One Lives hit DVD and Blu-ray this week 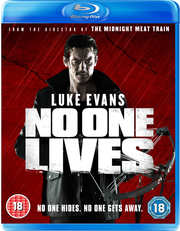 We usually prefer looking forward than looking back, except of course where classic films are concerned, but anyway we take a short break this week from that attitude to bring you news of a release we missed.

Extras on the Blu-ray include From Script to the Crypt behind the scenes featurette, whilst the recommended retail price will be around £14.99 for the SD release and £16.99 for the HD version.

Driving across country while relocating from their previous home, an unnamed man and his girlfriend, Betty, stop for food at a remote roadside bar/diner deep in redneck country. A minor run-in with a member of a ruthless criminal gang based in the area leads to the couple being taken hostage and installed in an abandoned farmhouse.

But all is not as it seems. When Betty is unexpectedly killed and a shocking discovery is made in the trunk of her car, the tables are dramatically turned when the true identity of her boyfriend is revealed. Soon, the gang members find themselves up against a smart and urbane, but equally ruthless and fearless killer, who adheres to a terrifying personal motto.