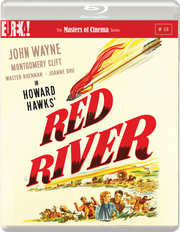 If you're experiencing the mid-week blues, then perhaps news of the fifth greatest western of all time, according to the American Film Institute, coming to Blu-ray might perk you up a bit.

Thanks to Eureka! Entertainment and their Masters of Cinema series, out on 28th October is none other than the 1948 iconic classic Red River. Directed by Howard Hawks, this stars the legends John Wayne and Montgomery Clift, the latter in his film debut. The cast includes Joanne Dru, Walter Brennan, Harry Carey, John Ireland and Hank Worden.

Presented in a brand new high-definition 1080p transfer, extras include the original theatrical trailer, video conversation by filmmaker and critic Dan Sallitt, conducted by Jaime Christley, and shot by Dustin Guy Defa and James P. Gannon, plus the obligatory booklet.

The runtime will be 133 minutes, subtitles for the hard of hearing are included, and the aspect ratio is its original 1.37:1. Expect a recommended retail price of £19.99.

One of Hollywood's most iconic westerns, Howard Hawks' Red River launches cinema's grandest cattle drive, and one of the screen's most powerful father-son dramas. One of John Wayne's most intense roles inspired one of his finest performances, and in his debut leading role, Montgomery Clift instantly leapt to the forefront of Hollywood's young actors.

After the Civil War, ranch owner Thomas Dunson leads a drive of ten thousand cattle out of an impoverished Texas to the richer markets of Missouri, alongside his adopted son Matthew Garth and a team of ranch hands. As the conditions worsen, and Dunson's control over his cattlemen gets ever more merciless, a rebellion begins to grow within the travelling party.