DVD
Shaun Of The Dead (UK)

Blu-ray
The Hitchhiker's Guide to the Galaxy

Article
The Broken Circle Breakdown arrives on DVD this November 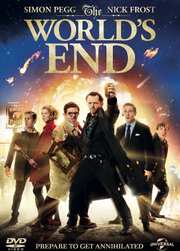 Call it what you will, the Cornetto trilogy, or Blood and Ice Cream trilogy, all we know is they all have a different flavour of Cornetto in them and star some of our favourite funny actors. Yes, Universal Pictures UK have announced the release of The World's End for 25th November on both DVD and Blu-ray.

Written and directed by Edgar Wright, this stars co-writer Simon Pegg, Nick Frost, Martin Freeman, Eddie Marsan, Rosamund Pike, Paddy Considine, Pierce Bronson and Bill Nighy. Beyond that we have almost zero details on extras to bring you, but expect a featurette and a trailer at the very least.

After the first few identical pubs on the golden mile, a mysterious atmosphere surrounds Gary and the group and the night soon spirals out of control. In the Cross Hands pub, a slapstick fight soon breaks out in the men’s toilets unveiling The Blanks, ass kicking aliens disguised in human form who are threatening to take over the town, and the rest of the world!

The reunion soon becomes much more than a pub crawl and a bigger challenge than ever imagined as they embark on the craziest mission of a lifetime.