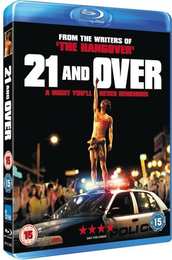 In between the classic TV releases, the foreign cinema, the cultural offerings, the horror flicks and the rom-coms, every now and again we like to leave room for news about a comedy involving beer.

Hence why today we bring you info on 21 And Over, out on DVD and Blu-ray this coming 9th September courtesy of Entertainment One. From the writers of The Hangover, this stars Justin Chon, Miles Teller and Skylar Astin.

Extras will include a Levels of Intoxication feature, Tower of Power feature, and a gag reel. Sorry, we have no idea what the aforementioned are, probably featurettes. The recommended retail price will be £15.99 for both formats, so you can choose between them and not have the result impact your wallet.

Straight-A college student Jeff Chang has always done what’s expected of him. But when his two best friends surprise him with a visit for his 21st birthday, he decides to do what’s unexpected for a change, even though his critical medical school interview is early the next morning.

What was supposed to be one beer soon turns into a night of chaos, over indulgence and utter debauchery.