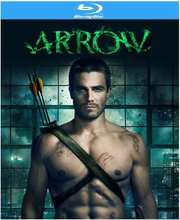 Normally these days we are used to seeing super heroes on the big screen, but Warner Bros decided to break with recent tradition and go old school, bringing a DC Comics character to the smaller one, well smaller depending on how big your TV is obviously.

Out this 23rd September on both Blu-ray and DVD is none other than Arrow: Season One, the modern-day re-imagining of the lesser known superhero. This contains all 23 episodes from the first season, developed by Greg Berlanti, Marc Guggenheim and Andrew Kreisberg.

This stars Stephen Amell, Katie Cassidy, Colin Donnell, David Ramsey, Willa Holland, Susanna Thompson and Paul Blackthorne. And before you begin to think this will be the one and only time you see some of the above in spandex, fear not, for it has been renewed and will see a second season.

Extras will include deleted scenes, gag reel, Arrow Comes Alive! documentary, Arrow: Fight School/Stunt School featurette, and Arrow at Paley Fest 2013 panel highlights. Alas no recommended retail price to bring you, but suspect something like £27.99 for the standard definition release, and £32.99 for the Blu-ray and we suspect you won't be far off.

After being marooned for five years on a remote island, billionaire Oliver Queen returns home with a mysterious agenda and a lethal set of new skills that he uses in a war on crime in this hard-hitting action series. Reinventing the DC Comics character for a modern-day audience, Arrow is not a super herom but a hero, every bit as dangerous as the criminals he’s hunting.