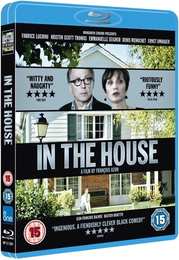 American films, all big loud blockbusters and juvenile comedies these days. So where to go for something that isn't that? Why across the channel to France of course! Entertainment One have announced the release of French thriller In The House for 22nd July on DVD and Blu-ray.

Arriving with a 15 certificate, the recommended retail price will be £17.99 for both formats. Yes, you read that right, no price hike for the HD version. Yippee!

A 16 year-old boy ingratiates himself into the house of a fellow student from his literature class and writes about it in essays for his French teacher.

Faced with this gifted and unusual pupil, the teacher rediscovers his enthusiasm for his work, but the boy’s intrusion sparks a series of uncontrollable events.