True story based drama No comes to DVD this June 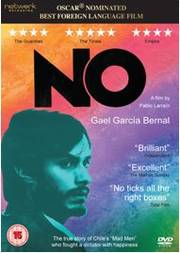 We are a bit of a fan of foreign cinema, so clearly we are enjoying the news that Network Releasing are all set to distribute the true story based drama No on 17th June.

Seamlessly blending scripted scenes with archive footage, this is a period piece which got an Oscar nomination. Directed by Pablo Larrain, this stars Gael Garcia Bernal, Alfredo Castro and Luis Gnecco.

Also available on download via Curzon and iTunes, the price for that will be £9.99.

Cynical young advertising executive Rene Saavedra is asked to spearhead the ‘No’ campaign for those opposing the Pinochet regime to bring democracy to Chile.

With scant resources, constant scrutiny from individuals sympathetic to Pinochet’s totalitarian regime including ad agency colleagues and the secret police, this bold and enthralling film looks at how a team of Chile’s “Mad Men” and opponents of the dictatorial regime instigated change.