US TV comedy Wedding Band comes to DVD in May 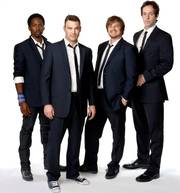 The cynical side of us, that'll be the British side, is looking at the recent US TV show Wedding Band and thinking it was just an excuse to sell music in the Glee mould.

But we shouldn't be that cruel, so we won't be, as FremantleMedia have announced the release of the first and only series on DVD this 20th May, alas it was cancelled after that.

Alas no other details we can bring you, other than that this features 10 episodes of around 44 minutes each, and a retail price of around the £17.99 mark.

This is a comedy drama about the bromance between four likable, occasionally reckless, friends whose weekends are spent playing in Seattle's premier wedding and events band. Tommy, Eddie, Barry and Stevie, collectively known as Mother of the Bride, all have day jobs, but in living out their dreams of being rock gods they've discovered that weddings are the wildest parties in town.

The groupies are the bridesmaids, the drinks are free, and they even get paid for it at the end of the night!